Home/
Appointments/
The not as lucky country

The not as lucky country 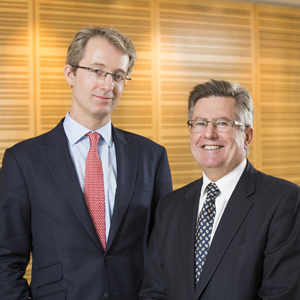 The global head of Ashurst has told Lawyers Weekly that Australia is not as attractive for a global law firm as it was when its merger with Blakes was announced.

The global head of Ashurst has told Lawyers Weekly that Australia is not as attractive for a global law firm as it was when its merger with Blakes was announced.

When asked if the slumping Australian M&A market and dip in the Western Australian resources market since September 2011, when the Ashurst-Blake Dawson tie-up was announced, made Australia a less attractive destination now, James Collis (pictured left), the Ashurst LLP managing partner, was unequivocal.

“Yes,” he replied. “One can’t deny the fact the Australian economy has entered a challenging period.”

Collis, however, went on to state that you “have to keep things in perspective”. He believes that the long-term economic trend in the Asia-Pacific is more positive than Europe, where many countries are experiencing growth well below the global average of around three per cent.

“China is predicted, even the most pessimist assessments I have seen, to grow at a rate of six per cent,” he said, noting Australia’s strong trading relationship with the world’s most populous nation.

“That is at least double the average global growth rate ... one has to take a longer-term perspective here.”

Last week Ashurst LLP posted its financial results, with turnover flat, profit per equity partner dropping by 8.6 per cent and profit falling by six per cent.

Those figures do not include the financial performance of Ashurst Australia.

Members of the global executive committee and the eight new global divisional structure heads have been in Singapore this week as Ashurst Australia and Ashurst LLP move towards full integration.

The newly unveiled global board will have 14 members, including three elected members from Australia.

David Turner, the chairman of the board of the CBA, and Robert Gillespie, the former director general of the Panel on Takeovers and Mergers in the UK, will be the two independent board members.

Four Australian-based partners will be co-heads of the four new global divisional structures the firm is introducing.

Ex Gilbert + Tobin partner Phil Breden will be the co-head of the corporate, commercial and competition group. His fellow-Sydney based partners Lisa Ritson and Paul Jenkins will also be practice group heads.

Ritson will take co-charge of the disputes, intellectual property and employment practice, while Jenkins will lead the finance group with Paris-based partner Laurent Mabilat. Perth partner Geoff Gishubl will be the co-head of the energy, resources and real estate practice.

No other country within the Ashurst network has divisional heads across all four areas.

Difficult decisions done and dusted
Ashurst has described the above measures as the most significant steps towards full integration.

“We have agreed [to] the basis of full financial integration,” said Carrington. “We will achieve a single profit pool, a common remuneration system and the partners of the merged firm will be moving to a modified lock-step system.”

While the original timetable for full integration was April 2014, Carrington said there was a strong possibility it would be achieved before then.

A successful partnership vote in both Australia and from Ashurst LLP partners is required before the two firms can formally fully integrate.

Carrington, in a similar vein to Gishubl, dismissed media reports from earlier this year that the firm was planning to cull 50 partners in Australia prior to full integration.

He also denied that he was walking the corridors of the firm tapping poorly-performing partners on the shoulder.

Carrington did, however, confirm to Lawyers Weekly that the ratio between full equity and salaried partners had changed.

“What I have been consistent about before we commenced our discussions with Ashurst LLP was that we had changed our internal structures to provide greater opportunities for the use of fixed-income partners as opposed to pure equity partners,” said Carrington, who added this was done to pave the way for lateral hires and to “make it easier for partners to transition into retirement”.

Around 25 per cent of the Australian firm’s partnership is now on a fixed income.

Since the formal tie-up with Ashurst was announced in September 2011, Ashurst has lost a number of high-profile partners, including Peter Stirling and Stephen Ridgeway to King & Wood Mallesons, John Emmerig to Jones Day and Melinda Upton to DLA Piper.

Conversely, the firm has taken partners from rivals, including the highly-rated M&A lawyers Gary Lawler and Garry Besson from Gilbert + Tobin.

Carrington said that both sides of the merger wanted to get the “difficult things behind us” before the full merger, nominating a common remuneration system, common partner appraisal system and building the associated IT infrastructure and HR policies as being particularly challenging.

“We have managed to get through the last two years and have the difficult discussions before we get formally married, as it were,” said Collis. “I think that will pay enormous dividends over the years to come.”

Ashurst Australia currently has 176 partners and 530 lawyers in Australia.

The fully merged firm will have a combined headcount of 442 partners and 1256 lawyers, as well as 27 global offices.

The not as lucky country