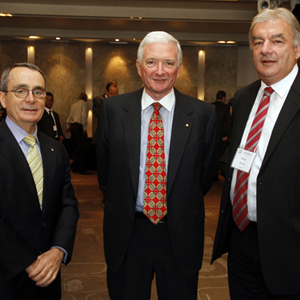 Dispute Resolution Boards (DRBs) will play an increasingly prominent role in major infrastructure projects in Australia in the future, a former NSW premier has said.

Nick Greiner (pictured centre), the current Infrastructure NSW chairman and former Liberal premier of NSW, has said it’s likely a DRB will be used during the construction of Sydney’s north-west rail link to ensure the project is completed without conflict between the parties involved.

“The north-west rail link, which is being prepared at the moment, is expected to use DRBs on its major contracts,” Greiner told delegates at the 12th Annual Dispute Resolution Board Foundation (DRBF) Conference in Sydney on 4 May.

Greiner said that major capital projects such as the 23km rail link can greatly benefit from using DRBs from the start of the project. He believes the successful “batting average” of DRBs speaks for itself.

“Since 1987 there have been 30 such DRBs used in Australia and New Zealand. In that time they have prevented dozens and dozens of issues escalating into disputes by constant engagement with the parties and by bringing significant expertise in major projects to the table.

“Across all these projects – ranging in cost from $22 million to $1.8 billion - there has been a total of just six formal referrals for determination, and all of those have been resolved successfully by the DRB.

“With that type of batting average it is inevitable DRBs will grow in popularity,” he said.

Greiner confirmed that the current south-west rail project already has three DRBs in place, while the Wynyard walkway in Sydney, which is part of central Sydney's Barangaroo development, also has a DRB in its contract.

“The capacity DRBs have to be proactive in engaging with the parties, and establishing clear and open lines of communication, is tremendously important for dealing with issues as they arise ... well before they escalate to the point where they become a serious threat to the progress of the project.”

Greiner added that the “vanishing small cost” of establishing a DRB as part of a contract is enticing, stating the base cost of using a DRB in Australia is usually less than 0.2 per cent of total cost for a project costing over $100 million.

The former premier highlighted the successful completion of the $500 million Sydney Port upgrade and the construction of the $1 billion Sydney Desalination Plant as examples of where the appointment of a DRB meant both projects were completed on time and on budget.

“Having been appointed from the very outset, the DRBs didn’t need to get up to speed on the projects every time an issue arose. They kept abreast of developments through regular meetings with the onsite and offsite representatives of the parties. They were well placed to deal with the dozens of issues that could easily escalate.”

Greiner used the troubled Reliance Rail project as an example of somewhere a DRB was not used from the outset with the result that the project has ended up being a disaster for everyone involved.

“It is interesting to look at the difficulties (of the Reliance Rail project) to see whether the use of a DRB or similar would have lessened the extent of the failure and difficulties, or at least made them more manageable.” he said.

Grainer also praised the proactive nature of the Dispute Resolution Board of Australasia (DRBA) compared to its contemporaries elsewhere in the world.

“One of the things that sets Australasia apart from other places in which DRBs operate, especially Europe, is that the emphasis here is not only on resolving disputes once they’ve arisen, but preventing issues from turning into disputes from the very beginning.

“It’s such a shame in Europe, where disputes must be formally referred to be adjudicated, that they don’t take full advantage of all DRBs have to offer. In fact, the name DRB is a misleading one in our local context. Here most disputes are not resolved; they are avoided in the first place.”