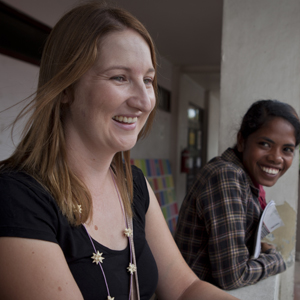 The access-to-justice system in East Timor is in “crisis”, an Australian lawyer working there has said.

Danielle Winzenried (pictured left) said the problem is partly due to a failure to translate laws from Portuguese into common languages of the Timorese people.

“Portuguese being the official language and the language that law is first promulgated in does come with difficulties because a lot of the population doesn’t speak Portuguese,” said Winzenried.

Advertisement
Advertisement
A 2010 census estimated 23.5 per cent of Timorese people speak, read and write Portuguese, up significantly from less than five per cent in a 2006 UN Development Report. Tetum is the second official language of the country, which some of the legislation has been translated into, but not all people in Timor speak Tetum either.

“It absolutely brings up access-to-justice issues … there are 16 languages and up to 35 dialects, some obviously more widely spoken than others, but it certainly adds another hurdle to access to justice, particularly for rural communities,” she said.

The country is one of the world’s poorest, a major after effect of the 24-year occupation by Indonesia during which more than 180,000 people are thought to have died from fighting, disease and starvation.

There is no legislation governing property and land disputes are a major issue stemming from the historical situation.

High rates of domestic violence are another major issue in East Timor.

“Recently, there was a domestic law that’s been promulgated [but] the community in general isn’t aware of the extent of it or what it means for their family and community,” said Winzenried.

The new law stipulates that domestic violence must be prosecuted. Once local authorities are aware of an incident it must be reported to the police and investigated within five days.

“Traditionally people may have gone to their local authorities [and had] mediation or sought some kind of traditional resolution, which raised questions about women’s representation and likelihood of a fair outcome, so it’s important that people are aware that domestic violence matters cannot be resolved informally at the local  level,” said Winzenried.

Fundasaun ECM is educating people on types of domestic violence and what constitutes it, and looking at family, social and economic issues permeating the situation.

Given there are very few lawyers in the country, especially outside of Dili, NGOs are critically important for educating people about their rights under the law. However, since 31 August Fundasaun ECM has been without funding. It could soon be forced to close.

“Our organisation is trying desperately to find funders … staff are here as volunteers but we don’t have funds to be able to get transport to be able to get out to the rural areas,” she said, adding that this is a main focus for the NGO, which sends paralegals to 22 sub-districts, which are four to five hours out from main areas in Timor.

The USAID-funded Access to Justice Program run by the Asia Foundation has supported five legal aid organisations, including Fundasaun ECM, for almost ten years. But that funding, which helps the organisations operate throughout Dili, Baucau, Suai and Oecusse, recently came to an end.

Winzenried is concerned there is now no funding for legal aid programs to assist vulnerable poor people with land disputes, veterans or “anyone who’s not aware of their rights who needs access to justice”.

Practising lawyers need to be able to speak Portuguese and this presents a hurdle for the majority of local lawyers, who have attended university in Indonesia and learnt in Indonesian or Tetum, explained Winzenried.

Under a new legal qualification process, lawyers must complete nine months’ legal training, part of it being in Portuguese, to be properly qualified, she said.

"“The period within which to complete the legal training has been extended to the end of 2015, so hopefully most lawyers will be able to complete the training within that  period, otherwise they will be unable to continue to practise,” said Winzenried.