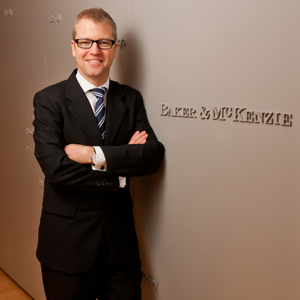 Baker & McKenzie has topped the list of the world’s strongest law firm brands for the third consecutive year.

Chris Freeland (pictured), managing partner of Baker & McKenzie in Australia, told Lawyers Weekly that he attributes the number one ranking to the firm’s ability to work fluently across borders.

He added that not being tied to struggling economies in some parts of the world is working in the firm’s favour.

These “prestigious” law firms are facing new competition, claimed the researchers on the Acritas Sharplegal 2012 Global Elite Brand Index, who evaluated firms based on awareness, ‘favourability’ and multi-jurisdictional capabilities. They found young, ambitious firms with global footprints are closing in on legacy firms.

One of the up-and-comers is King & Wood Mallesons, which made the list for the first time this year.

Stuart Fuller, chief executive partner of King & Wood Mallesons in Australia, credits the firm’s ranking to its strong ties with the growth market of Asia at a time when Europe and the US face continued economic uncertainty.

“The global economic slowdown has certainly caused clients to search for growth, and Asia represents a significant opportunity,” he told Lawyers Weekly.

A combination of factors has contributed to the rise of newly-merged “challengers” to the established globals, claimed the report. In addition to economic slowdown, which has led to lower demand for legal services in mature markets like the UK, the survey also cites client expectations for more cost-effective solutions, such as technology, LPOs and alternative fee arrangements.

Fuller agrees that clients seeking global legal counsel have different expectations than they may have in the past.

“[Clients] now want superior value and better access to solutions from people on the ground in the markets that matter most to them – and increasingly this is Asia,” he said. “In turn, this creates opportunities for challenger firms that are more nimble and more relevant to clients.”

But, contrary to the report, Fuller doesn’t believe these factors have weakened the stronghold of the legal market’s global leaders. Rather, he claims current conditions have simply allowed newly-merged firms like King & Wood Mallesons to consolidate their position in the global market.

“With the market challenges we expect in 2013, we’ll also see a degree of re-balancing,” he added.

Acritas chief executive Lisa Hart Shepherd has also predicted restructuring of the global legal market in 2013. She claimed it could resemble the international accountancy market, with a group of 15 dominating law firms as opposed to a ‘big four’.

But there may be few US firms rounding out this top group, with many slipping down the list in 2012.

More than 1000 in-house counsel were interviewed for the survey, with respondents in $1 billion-plus revenue organisations who have senior responsibility for buying legal services.

The 20 most powerful firm brands

* Interviews predate the merger of Herbet Smith and Freehills.