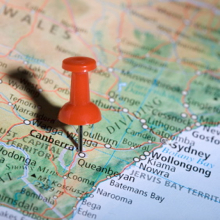 Law firm Maddocks has opened a new office in Canberra in a bid to reinforce its government practice.

LAW firm Maddocks has opened a new office in Canberra in a bid to reinforce its government practice.

For a firm that gains close to half its revenue from the public sector, the move has been in the planning stages for a long time.

This is the third office for the firm who opened its first office in Melbourne over 126 years ago, followed by the establishment of the Sydney office in 2002.

Mark Henry, head of the Maddocks Government sector, said the new office comes with a growing demand from the firm’s Commonwealth government client base.

“The new office will enable us to serve our Canberra-based clients, and those with an interest in Canberra, with local facilities and specialised local knowledge.

Simonetta Astolfi will head the new office, backed by 20 years’ experience dealing with high-level, complex public and private sector legal issues. Astolfi, who is new to the firm, will lead a team of lawyers advising Commonwealth clients on regulatory issues, commercial matters and dispute resolution, the firm said in a statement.

He said the Canberra office would be the missing link in the firm’s already strong government practice.