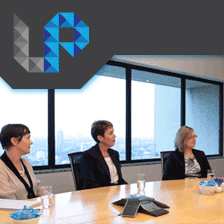 Partners from Herbert Smith Freehills and Ashurst feature in the inaugural Lawyers Weekly panel discussion video, which asked for insights on making partner.

Partners from Herbert Smith Freehills and Ashurst feature in the inaugural Lawyers Weekly panel discussion video, which asked for insights on making partner.

Partners Carolyn Pugsley from Herbert Smith Freehills and Angela Pearsall from Ashurst, along with the HR Director of DLA Piper Kate Weaver, met to discuss what it takes to reach law firm partnership. The panel discussion on Tuesday (26 March) was the first instalment of a quarterly video series entitled The Legal Panel, sponsored by Burrows Legal.

Pugsley, who was made a partner in July last year after starting as a graduate lawyer with HSF in 2003, said ‘soft skills’ were very much valued in potential partners.

“I think that’s a surprise to lots of people who’ve traditionally had this perception that it’s all about technical skills and billable hours and that’s really what counts … that’s very much a short-term view,” she said.

Pugsley was seconded to Orica and BHP Billiton, as well as HSF’s senior management team, before becoming a partner and said that a secondment would soon be seen as a prerequisite for making partner.

“You get over the other side of the fence and all of a sudden it clicks for you; it makes sense that [the client] is dealing with all these other issues and tensions that you just can’t see,” she said.

Pearsall said that intra-firm secondments were likely to become more prevalent with the globalisation of law firms and that lawyers would be more often expected to work in different offices, both locally and abroad.

“I did a secondment to our Perth office for two years and that was an integral step for me in ultimately becoming a partner,” said Pearsall, who was also seconded to AMP earlier in her career.

Mentoring was also discussed as another integral part of supporting new partners who, the panellists agreed, need to quickly get a handle on the firm’s financial figures and management processes.

Weaver said senior lawyers on the path to partnership often have a “champion” within their practice group, as opposed to a general mentor who sits outside their team.

“They’re seen to be two quite different roles,” said Weaver, explaining how a champion usually exposes an incoming partner to the right work and clients before putting them forward for partnership.

“More men have champions that women; women seem to have lots of mentors but not enough champions to get them up to partnership.”

Only around 20 per cent of partnership positions in Australian law firms are filled by women, but Pearsall argued that improvements were being made in this area.

“We’re seeing in excess of 50 per cent of female graduates coming through our ranks [at Ashurst] and … in the last five years we’ve seen the number of internal partner candidates be more up around 30 to 40 per cent female,” she said.