Home/
News/
G+T have all the right deal moves

G+T have all the right deal moves 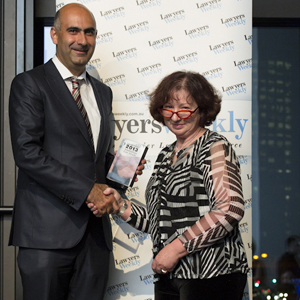 The corporate team at Gilbert + Tobin is not the biggest, but it is the best.

The corporate team at Gilbert + Tobin is not the biggest, but it is the best.

“It’s a great honour and really a great achievement for all of us,” said Neil Pathak (pictured accepting the Award with Dr Rosemary Howell), the head of the firm’s Melbourne-based M&A team, when talking to Lawyers Weekly after accepting the Award.  “We’re a smaller team than some of the other larger firms and we’ve done some great work this year and we’re thrilled [to have won].”

The G+T corporate team has acted on some of the most noteworthy deals over the past 12 months.

Channel Nine used its long-term legal advisor on its $3.4 billion restructure and the firm was also engaged by GrainCorp when it received a $3.4 billion takeover offer from Archer Daniels Midland (ADM).

In a tight market, deals of that magnitude go a long way.

“It’s pretty tough, transaction volumes are definitely down and it’s important really to make sure that clients get full value for their money,” said Pathak. “In that context we’re particularly happy because we can only get this Award because of our clients; if they didn’t want to use us we wouldn’t get it, so we’re grateful to them.”

Other notable deals involving the G+T corporate advisory team included advising Telstra on both the $1.9 billion sale of Austar to Foxtel (Telstra is a 50% partner in Foxtel) and the largest deal in New Zealand in 2012, the NZ$840 million sale of TelstraCiear to Vodafone.

G+T also acted for the independent directors of Charter Hall on a $1.74 billion transaction.

“I think one thing we do really well is work in teams and we’ve got some very strong transactional teams and everybody plays their part,” said Sydney-based partner David Clee (pictured far left with Pathak and corporate partner Ben Macdonald).

Five other noteworthy firms were finalists in this competitive category.

Firms had the flexibility to either nominate a whole team or individual deal for this Award.

Clee was also a Dealmaker Award finalist, alongside his G+T colleague John Willamson-Noble.

G+T have all the right deal moves