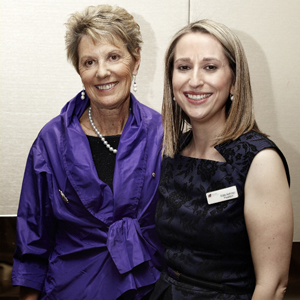 A who’s who of the bench, Bar and private practice made up the 180 guests at the AWL anniversary dinner at the Grand Hyatt in Melbourne on Saturday (17 August).

Vanstone’s speech was a highlight of the night, according to AWL outgoing president Kate Ashmor (pictured right).

“[It was a] hilarious speech, during which she encouraged women to be confident and back themselves, in order to progress in the workplace and take it up to the blokes,” she told Lawyers Weekly.

“Amanda shared a number of anecdotes from her long career in the Senate and as a minister ... she had the entire Mayfair Ballroom in absolute hysterics.”

Chief Justice of the Family Court of Australia and patron of the AWL, Diana Bryant AO QC (pictured left), also gave a keynote address. She congratulated the association on its achievements over the past 15 years, but added that “there is always much more to be done”.

“About what is yet to be done we need look no further than some of the public opprobrium given to our former prime minister, the Hon Julia Gillard ... it is concerning to see what might be a genuinely underlying and unpleasant misogyny in at least parts of our society.”

Even the inaugural president of AWL, Alexandra Richards QC, managed to send a message of congratulations, despite being on assignment “deep in the Sahara Desert”, Ashmor said.

Ashmor was the MC at the anniversary dinner and will step into the role again at this year’s Lawyers Weekly Women in Law Awards to be held in Melbourne on 18 October. Incoming AWL President Amy Challans will also attend the Awards and deliver the keynote address.

Check out the photo gallery below for more highlights from the AWL event.