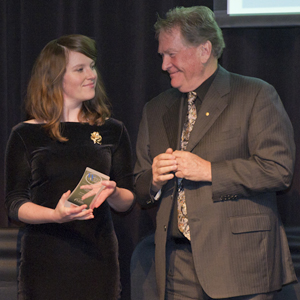 “Exceptional” academic achievements combined with a commitment to social advocacy clinched the prize for the winner of this year’s Forensic Document Services Law Student Award at the Lawyers Weekly Women in Law Awards 2013.

“Exceptional” academic achievements combined with a commitment to social advocacy clinched the prize for the winner of this year’s Forensic Document Services Law Student Award at the Lawyers Weekly Women in Law Awards 2013.

Monash University JD student Roberta Foster was presented with the Award by Paul Westwood OAM (both pictured), the managing director of the Award sponsor, at the awards ceremony at the Sofitel Hotel in Melbourne on Friday night (18 October).

Presenting the Award, Westwood, who is married to Chief Justice Helen Murrell, who was last month appointed as the first female chief justice of the ACT Supreme Court, commented: “With three sisters and five daughters I’m very mindful of the contribution women make at domestic and professional levels and in our community, and often their contribution is overlooked.”

Foster was nominated for the Award by Justitia Lawyers & Consultants, where she has worked as a legal research assistant since 2011, and she acknowledged the firm’s influence on her career in her acceptance speech.

“I can’t communicate how wonderful [Justitia Lawyers & Consultants] are as a firm and a mentor to me. We’re all women and it’s been an amazing start to my career,” said Foster.

Foster was described by the judge of the Award, Helen McKenzie, the deputy managing partner of Ashurst Australia, as the “outstanding finalist” in a group of “impressive women”.

“[Foster] has a keen awareness of the potential she has to make a difference and has demonstrated a determination to achieve her goals through hard work and active learning,” said McKenzie.

Foster, who in her award nomination was described by Justitia partner Sarah Rey as “one of the most competent and well-rounded students to have been employed to date”, has secured a place on Minter Ellison’s 2014 Graduate Program.

She is also a founding member of the Progressive Law Network and is involved with Feminist Lawyers.

“I also want to thank my friends and family, and my friend Sophie Brown who is my fellow co-convenor of PLN (Progressive Law Network) city branch,” said Foster.

“It’s been amazing being supported by so many fantastic women through the duration of my law career and hopefully going forward from this point on.”