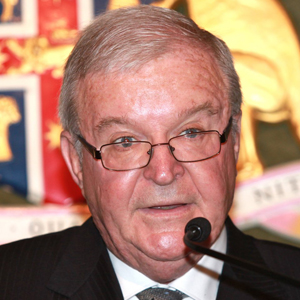 NSW chief justice Tom Bathurst QC has hit out at perceptions judges are elitist on an evening when the NSW Law Society president was revealed as a suburban single mum.

Bathurst (pictured) was speaking at the Opening of Law Term dinner in Sydney on Monday night (3 February). The chief justice confronted recent media criticisms that judges are “out of touch and soft on crime” with a strident defence of the judiciary.

Judges in NSW have recently come under fire in the wake of the death of Thomas Kelly.

Kelly died after receiving a king-hit to the head in Kings Cross in Sydney in July 2012. In November 2013, his killer, Kieran Loveridge, received a four-year minimum sentence for manslaughter.

Bathurst said that judges should not be immune from criticism, but debate about mandatory sentencing should be “informed debate”.

“An informed debate on the issue must go further than simply attacking sentences currently imposed by the courts, particularly if such attacks are without regard to the common law and legislative principles which underpin such sentences,” he said.

“One assurance I can give, however, is that judges, consistent with their judicial oath, will continue to apply the law as they perceive it without fear or favour,” he said. “That, I would suggest, is the true mark of judicial courage.”

Prior to Bathurst’s speech, Ros Everett was revealed as the new president of the NSW Law Society.

Everett set up her own practice in Penrith in Sydney’s west shortly after being admitted in 1996.

“As a single mum with a big mortgage and no money, it was tough,” she said, telling the room full of judges and senior legal figures that she set up her own practice after quickly realising that she had little chance of being a partner within an established law firm. “Fortunately the practice was very successful and I never looked back.”

During her speech Everett took aim at NSW workers compensation reforms in 2012, saying they have “seriously compromised access to justice”.

Everett also criticised mandatory sentencing, expressing scepticism that it would lead to reductions in drug and alcohol violence.

“Studies show that mandatory minimum sentences just don’t work,” she said. "They had little or no deterrent effect, and impacted on disadvantaged groups.

“Each case must be determined on its facts and we must maintain judicial discretion.”

Everett also announced that the NSW Law Society was in its final stages of negotiating a contract with Lifeline to provide a counselling service to NSW lawyers.

The new service would be known as Lifeline Legal.