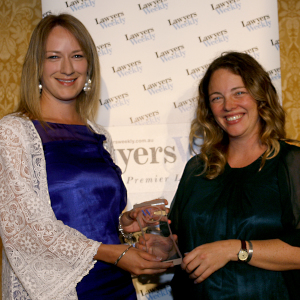 The Pro Bono Award winner at the Lawyers Weekly Women in Law Awards has certainly followed her mum’s credo of ‘living your values’.

The Pro Bono Award winner at the Lawyers Weekly Women in Law Awards has certainly followed her mum’s credo of ‘living your values’.

Wotton + Kearney partner Heidi Nash-Smith won what is one of the most prestigious awards on the Women in Law Awards agenda.

“I am extremely honoured and proud to stand here and receive this Award,” said Heidi, who also acknowledged the other finalists. “It is such an important part of our professional responsibility as lawyers to give back to the community. My mum said that in life you have to live your values, and I have tried to do that with everything I do.”

Heidi has certainly applied her mum’s words to her professional life.

In 2012, she was a key figure in the establishment of W+K’s Pro Bono and Corporate Social Responsibility program, ‘Community Footprint’, and she has since devoted more than 1,100 hours to the program.

In the past financial year alone, she committed 425 hours to Community Footprint and supervised 30 lawyers working on 17 matters across two states.

Heidi was presented with her award by Rachel Ball, a director of advocacy and campaigns at the Human Rights Law Centre.

Rachel, who judged the Pro Bono Award category, made a powerful speech about the continuing importance of pro bono work for marginalised women throughout Australia.

“Pro bono is a good thing to talk about on a night like tonight, when we talk about women’s equality and discrimination, and how it often overlaps with so many other issues,” said Rachel, singling out the growing rate of Aboriginal females in custody, women with disabilities in incarceration and the increasing backlash suffered by Muslim women for wearing the burqa or niqab.

“Pro bono can go to addressing some of those other forms of disadvantage,” she said.

The other finalists in this category were senior Maurice Blackburn partner Kathryn Booth; Krista McMeeken of Corrs Chambers Westgarth; Claire Schneider from Norton Rose Fulbright; and Lisa Lahey and Freda Wigan from HopgoodGanim (who made a joint submission).

Another area in which Heidi has been heavily involved is providing assistance to asylum seekers and refugees.

Justice Connect is a key pro bono partner with W+K, and this year Heidi also established a partnership with the Refugee Advice & Casework Service (RACS), working to raise funds for and awareness of issues that affect asylum seekers.

In May, she and W+K hosted a cocktail party at the firm’s Sydney office to launch the ‘Friends of RACS’ program.

“Heidi has been instrumental in opening pathways to perform important judicial review work for RACS,” said Tanya Jackson-Vaughan, executive director at RACS. “This is demonstrated through Heidi’s work to assist people in immigration detention who have received a negative Independent Merits Review. In the last year, Heidi has successfully represented three such clients in their judicial review applications.”

Other laudable initiatives Heidi has been involved with include developing W+K’s first pro bono secondment at the MOSAIC legal advice clinic; developing a ‘tool kit’ to help members of the Stolen Generation access their government records; and organising the firm’s participation in the annual ‘Walk for Justice’.