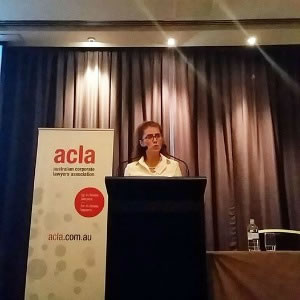 Recent judgements have put in-house counsel and lawyers in private practice on an even footing by making it easier for their legal advice to attract privilege, a Holding Redlich partner has said.

“The decision in my view is positive news because it suggests a move away from this idea that ‘employed lawyers’ have a special handicap in that they have to show that they are independent,” she said.

‘Employed lawyers’ previously had to prove their independence in order for their legal advice to attract privilege. This made it more difficult for in-house lawyers in government departments and companies to protect the confidentiality of communications with their client.

“The root of the court’s thinking seemed to be that because of the employment relationship, an ‘employed lawyer’ is not free of personal loyalties, duties or interests,” said Ms Fernandez.

However, following the recent comments by Justice Michael Wigney in the Archer Capital case, in-house lawyers will now be accepted as independent without evidentiary burdens just as lawyers in private practice are considered independent.

In the Archer Capital case, it was alleged that Sage’s company secretary and group legal director, Michael Robinson, lacked the independence necessary to found a claim of legal professional privilege because he worked in-house with his client.

Justice Wigney rejected this claim, indicating that legal professional privilege will attach to confidential communications from an employed solicitor working in a “professional capacity in relation to a professional matter that arises from the relationship of lawyer and client”.

“Justice Whitney also thought it was of no consequence to the question of independence that [Mr Robinson] was not admitted in Australia and didn’t have a practising certificate in Australia,” noted Ms Fernandez.

A further problem is that working in-house in dual roles can blur the lines between legal and commercial duties, making it unclear which communications are protected by lawyer-client privilege and which are not.

Ms Fernandez said this has become a significant issue, quoting the 2012 ACLA in-house counsel report, which found that 80 per cent of the heads of legal functions in-house had formal responsibility for at least one additional function, the most common being compliance (53 per cent), the role of company secretary (48 per cent) and governance (47 per cent).

Untangling legal from non-legal advice can be a challenge for in-house counsel as well as the courts.

Fortunately, the concept of legal advice is no longer narrowly focused and “now extends to professional advice to what a party should prudently or sensibly do in a particular relevant legal context”, added Ms Fernandez.

Ms Fernandez said in-house lawyers should be very careful about stamping documents so they are clearly shown to be privileged legal advice.

She advised against circulating legal advice widely by email inside or outside organisations and said in-house counsel must not disclose even the gist of the legal advice as this may compromise its privileged status.