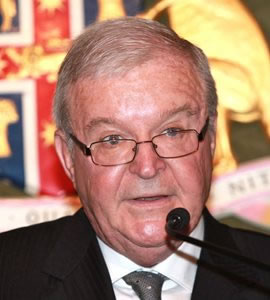 As spiralling costs block people from pursuing litigation, technology could bring down expenses and decrease reliance on the courts, the Chief Justice of New South Wales says.

“I do not think these statistics reveal a missing minority or a missing middle,” Justice Bathurst said. “What they come dangerously close to is a missing majority.”

He suggested the solution could lie in courts embracing innovative online programs.

“Technology undoubtedly should play a role in linking people to the judicial and legal system and a mention of it could also allow them to operate independently of it,” he said.

Courts have an obligation to streamline their procedures and facilitate access at the lowest costs, with technology a key strategy, Justice Bathurst suggested.

Next year, the court intends to launch an electronic courtroom system that will allow parties to appear 'virtually' for directions hearings or minor civil cases.

In addition, Justice Bathurst predicted technology may minimise the need for people to use the court system at all.

“It might be heretical for someone like me to suggest to take the step proposed… What if simultaneously the very reliance on the legal system and courts themselves were to decrease?” he asked.

“Consideration should be given to how litigants can best be given information to discern if they require legal services, the most appropriate type of services they require and the costs involved in the various alternatives available to them.”

As an example, he pointed to a US system allowing builders to gain online approval for draft plans, bypassing the courts and local councils.

“At the very least, an informed consumer group has the potential to increase efficiency in how such services are provided.”

However, he warned technology has some drawbacks, noting the “litigant without access to the internet will be akin to the illiterate litigant of former generations”.

He also suggested technology would only provide a solution if properly supported by funding.

“Senior statutory office holders such as myself can't afford to bring litigation unless it's absolutely dire and desperate, so how is someone with average weekly earnings, because they can't get assistance for a civil matter, going to cope? The problem is money.”

He suggested funding cuts for legal aid were due to a lack of political constituency to rally around the cause: “Somebody needs to provide community leadership if they want to solve the funding problem.”

Meanwhile, Malaysian Bar Association immediate past president Chris Leong shared the Malaysian experience with legal aid, which has rapidly expanded since its inception in 1982.