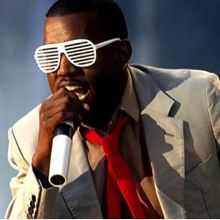 N-n-now that that don't kill 'Ye, can only make him stronger: Kanye West wins copyright battle with Vince P(eters).

Kanye West (or â€˜Ye as heâ€™s known) has hit the headlines again this week.Â Somewhat surprisingly for the rapper, this time it is not for an unprovoked public outburst (need we remind you of the 2009 VMAs where he commandeered the microphone off award winner Taylor Swift) or for his relationship with reality star Kim Kardashian, about whom he wrote the song Perfect B**ch (ah, true love) and who is most famous for her particularly short marriage which lasted all of 72 days.Â No, this week Kanye is making news for his win in the Seventh Circuit Court of Appeals in the copyright battle over his 2007 hit song â€œStrongerâ€.

As we have previously posted (see here), in 2010 Vincent Peters (aka Vince P) brought copyright infringement proceedings against Kanye in the US District Court alleging that the latterâ€™s song â€œStrongerâ€ infringed his song of the same name.Â In particular, Peters alleged infringement in respect of:

Peters was unsuccessful at first instance and appealed to the Seventh Circuit Court which, in an opinion of Justice Wood handed down last week, affirmed the District Courtâ€™s judgment.Â

In assessing the infringement claim, the Seventh Circuit Court applied a two-prong test whereby it considered first whether Kanye had an opportunity to copy Petersâ€™ song and second whether the two works are substantially similar.Â

On the evidence, the Court found that the first prong was made out.Â In 2006 Peters approached music producer John Monopoly (who happens to be Kanyeâ€™s business manager and close friend) about producing his single â€œStrongerâ€.Â While their professional relationship did not develop further, as a result of their meeting Monopoly had in his possession a copy of Petersâ€™ song.Â Less than a year later Kanye released his album Graduation, on which the single â€œStrongerâ€ featured and for which Monopoly was listed as a manager.Â On this basis, the Court held that there was more than enough evidence to support an inference that Kanye had an opportunity to copy the song.

However, it was the second prong where Petersâ€™ case floundered.Â The Court held that although both songs quote the German philosopher Nietzsche, which might seem an unusual coincidence at first, this aphorism has been repeatedly invoked in song lyrics over the past century.Â To illustrate this point, Justice Wood (a closet American Idol fan perhaps?) made particular mention of Kelly Clarksonâ€™s recent hit â€œStronger (What doesnâ€™t kill you)â€.

Peters argued, though, that it wasnâ€™t just the words used which were similar but also the rhyme patterns.Â The Court quickly dispensed with this argument, emphasising that copyright protects actual expression, not methods of expression.Â In the Courtâ€™s view, just as a poet could not claim copyright in the form of a sonnet or limerick, nor could Peters claim copyright over a tercet (for those of you whose knowledge of poetic devices is as lacking as ours, this is a group of three lines rhyming together).Â

Finally, Peters argued that references in each song to Kate Moss (his line â€œTrying to get a model chick like Kate Mossâ€ vs Kanyeâ€™s â€œYou could be my black Kate Moss tonightâ€) were evidence of substantial similarity.Â The Court disagreed, finding that the lines were entirely different, that Kate Mossâ€™ name alone cannot constitute protectable expression and (with a twinge of regret as to the state of society) that analogising to models as shorthand for beauty is commonplace.Â

Overall, the Seventh Circuit Court concluded that the songs â€œshare only small cosmetic similaritiesâ€ in that they rhyme similar words, draw from a commonplace maxim and equate beauty with a specific famous model. Â While Kanyeâ€™s ego hardly seems to be in need of a boost, we can just imagine him celebrating this win by telling himself (and, letâ€™s face it, anyone else who will listen) â€“ â€œN-n-now that that donâ€™t kill me / Can only make me stronger / I know I got to be right now / Cause Vince P canâ€™t get much wrongerâ€.