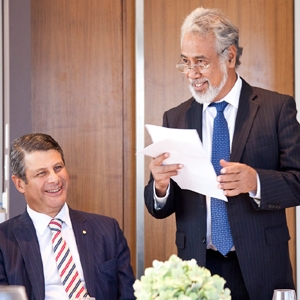 Cornwall Stodart hosted and sponsored a lunch with Gusmao and 20 other VIPs in the lead up to Gusmao’s bid for another five-year term as the Prime Minster of East Timor.

Cornwall Stodart consultant Peter McMullin, who has spent significant amounts of time in East Timor, said he believes Gusmao, who has managed a coalition government for the past five years, is the only person who can make a real success of the country.

Former Victorian premier Steve Bracks also attended the lunch. He is advising Gusmao on governance arrangements and has been involved in the establishment of the Chamber of Commerce, an Anti-corruption Commission and the Civil Service Commission.