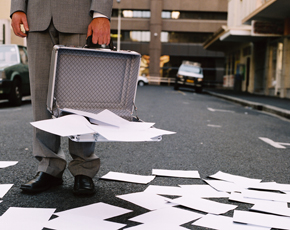 The managing partner and two senior partners of a Melbourne law firm have been found guilty of professional misconduct and suspended from practice after mishandling over $300,000.

The managing partner of Anderson Rice Lawyers, Philip Barton, along with partners Michael Coldham and Donald Brookes, had their practising certificates suspended for nine months by the Victorian Civil and Administrative Tribunal (VCAT) yesterday (19 January).

Victorian Legal Services Commissioner (LSC) Michael McGarvie said the men failed to present over $300,000 worth of cheques to third party providers between 2004 and 2007. The money was owed to barristers and expert witnesses.

The LSC brought charges of professional misconduct at common law against the lawyers after it was discovered, during a routine trust account inspection, that they had deliberately withheld the cheques in order to reduce the level of debt in their law practice’s overdraft account.

McGarvie said the decision should serve as a reminder to legal professionals about the importance of acting with honesty and integrity.

“It is disgraceful that these lawyers knowingly and willingly withheld payments from fellow members of the profession and professionals from other industries for their own financial convenience,” he said.

“This is a case where the practitioners tried to arrange their financial affairs through dishonest behaviour and were found out by the legal regulators … Lawyers who are experiencing financial difficulty should seek the assistance of the professional associations or financial support services immediately. The legal regulator and the courts will not forgive financial misconduct.”

VCAT accepted the LSC’s submission that if the conduct had not been detected, it would have continued indefinitely. Further, VCAT said the lawyers “engaged in disgraceful and dishonourable conduct upon their own admission” and that this case should “send an unmistakable message to the state’s legal profession that this sort of conduct will not be tolerated”.

Anderson Rice is a boutique corporate and commercial firm. Lawyers Weekly approached the firm for comment, but the firm did not respond to telephone calls or email inquiries.