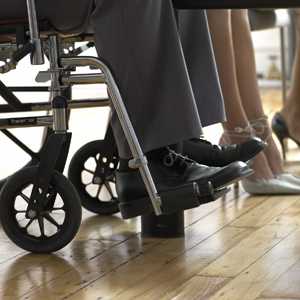 The president-elect of the Australian Lawyers Alliance (ALA) is calling for honesty from the Government about who will receive support under the National Disability Insurance Scheme (NDIS).

Anthony Kerin voiced concerns that the NDIS would not live up to its proposed benefit to the community and that the Federal Government is misleading “vulnerable Australians” in a bid to bolster re-election prospects.

The Productivity Commission’s report into disability care and support, released in August last year, estimated that “around 410,000 people” would receive funding support from the NDIS.

“Given that there are approximately four million people with disability and 2.6 million carers in the country… at a very early stage [the Government] needs to say exactly what [the NDIS is] going to cover, what it’s not going to cover and how many it’s going to cover, because there might be some disappointment if its built up to be bigger than it can be from a financial point of view,” said Kerin.

In a speech to the Grattan Institute in Melbourne on 11 April, Disability Reform Minister Jenny Macklin said the NDIS “would insure all Australians for the cost of care and support in the event of significant and permanent disability”.

She also announced that the scheme would be fast-tracked to mid-2013 before the next federal election and a year ahead of the Productivity Commission’s schedule, despite it still requiring a “vast amount of consultation”.

“This is a massive project and the last thing [the ALA] want is for it to be done in a haphazard fashion. You want to make sure it’s considered because it’s for the long-term benefit of Australians. It’s not about a short-term goal,” said Kerin.

“To suggest that every Australian with a disability under 65 years of age can expect to receive care would appear to require substantial funding beyond that mooted to date,” he said.

While he admitted that any NDIS that brings improvements would be “better than nothing”, Kerin warned there was “a lot of expectation in the disability sector” and growing apprehension.

“There are a lot of [disability group] rallies coming up around the country at the end of April,” he said.

“Also, [around] current issues of funding [in South Australia], where I’m from … the Local Government is trying to do something about it because you can’t wait a year, there are people in need right now.”

The NDIS was on the Council of Australian Governments’ (COAG) meeting agenda in Canberra on 13 April and Kerin said the ALA would consider what came out of the meeting as to how realistic the planned roll-out is.

A green paper released in South Australia this month by the Motor Accident Commission suggested a move from a common law fault-based scheme to a no-fault scheme.

Kerin said the ALA believes this would ultimately slash common law rights for damages for injured people around the country, and that the proposed change is related to the National Injury Insurance Scheme, which is running in tandem with the NDIS.

“[The suggestion] came out of the blue. No one’s been consulted about it; you would have thought locally [the ALA] had an interest. Now it’s out for consultation,” said Kerin, adding that no-fault schemes “simply don’t work in the long term”.

“They cost too much; they don’t extend coverage after a time. It would delete benefits even more to sustain itself and it has a huge bureaucracy which costs a lot of money to run,” he said.

Kerin said the ALA had been liaising with disability advocacy groups and that the Federal and State Governments should do the same to ensure the concerns of people with disabilities are properly represented.

“People need to be vigilant in supporting the rights of people with [a] disability as set out under the Convention on the Rights of People with Disability. A rights-based approach should dictate policy development,” he said.

Kerin will take up the national presidency of the ALA in July this year.