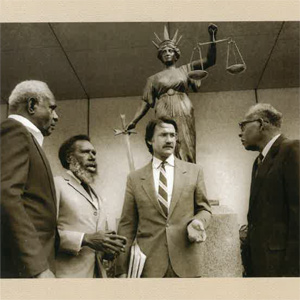 A QC who acted in the Mabo case has said he wrote his newly-updated book because he thought it was “appropriate to explain the litigation to the Australian community”.

“Justice Margaret White was my opposing junior counsel during the 10 years of the litigation, so we got to know each other pretty well,” revealed Keon-Cohen, who was junior counsel for the plaintiffs for the duration of the Mabo case.

“I am in a unique position [to write this book] because in my chambers I have about 60,000 pages of court material: barrister’s research notes, witness statements and the like, collected over 10 years of the litigation, and the book is founded on those materials,” he added.

The Mabo case, which recognised Aboriginal land rights for the first time, was a landmark case in the history of Australia and Keon-Cohen, who took silk in 1996, said that his involvement in it has had a major effect on his career since.

“I spent the first 10 years of my practice [at the Bar] involved in this case,” said Keon-Cohen, who joined the Melbourne Bar in 1981. Previous to that he had spent three years working with the Australian Law Reform Commission in Sydney, where he researched for the Commission the grounds for recognising Aboriginal customary law.

“So I travelled around Australia, Canada and the US looking into that topic and was very well informed about all these issues,” revealed Keon-Cohen, “[So] when I came to the Bar I was retained by the plaintiffs and their lawyers.

“A lot of my work [since] has been in the native title arena ... I’ve done a lot of lecturing and publishing on this topic and attended lots of conferences [to speak on native title].

“I have done other work of course ... but the native title arena has been a major part of my practice since Mabo.”

Other high-profile cases that Keon-Cohen, who is with Owen Dixon Chambers East in Melbourne, has acted on include the Wik case and the Tasmanian Dams case.

This is the second edition of Keon-Cohen’s book; the first edition, which he also submitted as his thesis to gain his PhD from Monash University, was launched in 2011.

“A lot of the material is new in this second edition of the book; the original had many errors ... and no index.

“In the second edition I have set out to correct those errors and include new material of interest to readers.”

Keon-Cohen, who was awarded an Order of Australia for his services to the law in 2012, said the book explains “for the layman” the plaintiffs’ motivations in Mabo, the various legal obstacles the legal team overcame, and also looks briefly at the legacy of the case.

“The book contains numerous photographs ... a collection of original court documents ... [as well as] personal documents and letters of my own,” he added.

The launch of the book takes place at the same time as the 5th Annual Native Title Law Summit, which will be held in Brisbane on 17 and 18 June.

Barristers who will be speaking at the Summit include Raelene Webb QC, the newly-appointed president of the National Native Title Tribunal, who will deliver the keynote address.

This year the Conference will examine the practise of native title law and the evolution over the past 20 years of people’s understanding of the Native Title Act.