Fathers will help end discrimination at the Bar 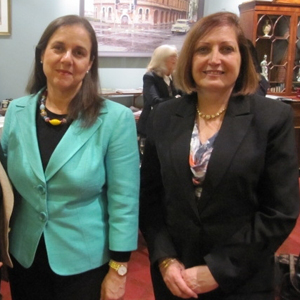 Sydney silk Kylie Nomchong has said the promotion of female barristers will be driven by male colleagues, partners and even judges who have daughters.

Nomchong (pictured left), from Denman Chambers, told an audience of women considering a career at the Bar that senior men in the profession, who also happen to be fathers, are speaking out about discrimination against women.

“Fathers can’t bear it when their daughters, who have worked so hard, are discriminated against ... and so you get this push for acceptance from the men,” she told attendees at a Women Lawyers of NSW event entitled Law as a Career – Coming to the Bar held in Sydney last week (15 May).

“They promote their own daughters and the role of women at a higher level,” she added.

Nomchong admitted that she has not personally experienced or witnessed gender discrimination in her 25 years as a lawyer, 16 of which have been spent at the Bar. She added, however, that she has heard anecdotal stories of discriminatory behaviour, specifically in relation to the type of work women are offered.

“Boys get the harder cases,” she explained. “They think [women] don’t have the stomach for it; an unpleasant adversarial street fight you’re about to put someone through.”

This type of discrimination is decreasing, Nomchong continued, and female barristers are being shown greater respect due to a combination of factors, including the sheer volume of women joining the Bar and the growing adoption of the Law Council of Australia’s Equitable Briefing Policy.

The Policy states that, in selecting counsel, lawyers and clients should identify and genuinely consider engaging female counsel in the relevant practice area.

Nomchong claimed that some clients are even pressuring firms to demonstrate their compliance with these recommendations.

“I recently gave a talk at a firm that works for the Big Four banks and each bank is asking the panel solicitors to report on compliance with the Equitable Briefing Policy.”

Barrister Larissa Andelman of 15 Wardell Chambers and Sarah Blakelock, a senior associate at Ashurst, also spoke at the event.

Fathers will help end discrimination at the Bar