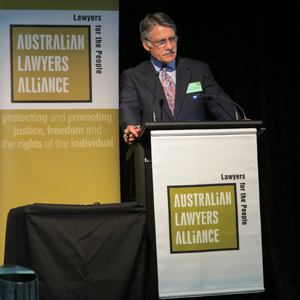 A judge, a QC and a high-profile silk were among the keynote speakers at the Australian Lawyers Alliance’s (ALA) Victorian Conference in Lorne last weekend.

Dr Bryan Keon-Cohen AM QC (pictured), president of the Commission of Inquiry Now, discussed the Royal Commission into Institutional Responses to Child Sexual Abuse at the ALA’s annual two-day event held on 17 and 18 May.

Other keynote speakers included Victorian County Court Judge Philip Misso, who provided an account of what it is like to be a judge running a busy civil list, and Tim Tobin SC, who spoke about the litigation surrounding the Victorian bushfires.

A drawcard of the event was a talk by US lawyer Michael ‘Dan’ Mori, who represented David Hicks against charges of being an enemy combatant of the US. His keynote, entitled Reflections on the War on Terror, sparked debate among the 170 lawyers and academics in attendance.

See our gallery below for more highlights from the event.