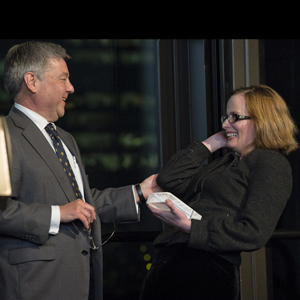 A leading barrister in the area of construction law took out the inaugural Junior Counsel Award, proudly sponsored by Sheahan Lock Partners, at the 2013 Lawyers Weekly Australian Law Awards on Friday (26 July).

­A leading barrister in the area of construction law took out the inaugural Junior Counsel Award, proudly sponsored by Sheahan Lock Partners, at the 2013 Lawyers Weekly Australian Law Awards on Friday (26 July).

Nuala Shaw (pictured with John Sheahan from Sheahan Lock Partners), a member of both 5 Wentworth Chambers in Sydney and Alfred Lutwyche Chambers in Brisbane, was described by Jennifer Turner, special counsel at King & Wood Mallesons, as doing work that is “so efficient, so fast and so amazing”.

Shaw, who was nominated by a colleague, came to the Bar in 2010, having worked in private practice at both King & Wood Mallesons in Sydney and Freshfields Bruckhaus Deringer in London.

Shaw has represented a number of major companies as junior counsel, including Baulderstone, St Hilliers and Citywide. She is also currently junior counsel for Lend Lease Management and Construction (Australia) in proceedings against Kellogg Brown & Root.

On being presented with the Award, Shaw said she was “hugely honoured” to have won.

She added: “I owe this award to the people who’ve shown interest in me and mentored me.”

Shaw said she made the move from private practice to the Bar because she was looking for “the next challenge”.

“[At the Bar] it’s not enough to know the substantive law, you need to know how to present that persuasively and how to manage your case strategically to achieve a result, and I was attracted to that challenge.

“I didn’t really know how I was going to go, there was every chance I could fail, but sometimes you’ve just got to go for it and back yourself and see where things take you,” she added.

Shaw won out in an impressive field, which included two finalists from Foley’s List, including Jessie Taylor, whose areas of expertise include mental health and human rights law, and who, at the age of 27, fostered a teenage Afghan refugee who was just 14 when he travelled alone from Indonesia to Christmas Island in 2009.

The other Foley’s finalist was Justin Mereine, who has been published in several legal publications and specialises in complex commercial litigation. Rounding out the quartet of finalists was Sandrine Alexandre-Hughes from Queens Square Chambers who, in addition to being an international family law expert, is also a founder of the French Australian Lawyers Society.

Shaw said that she reckons the key to being a good advocate is to be yourself.

“I think the key to good advocacy is knowing yourself and embracing the qualities of yourself that do the job, not trying to be someone else, and doing the best with what you’ve got.”

She added that, despite working in an area where the majority of clients are male, she has never felt discriminated against in the law.

“I’ve always felt welcome in the profession; I’ve never really struggled or battled against any form of discrimination.”