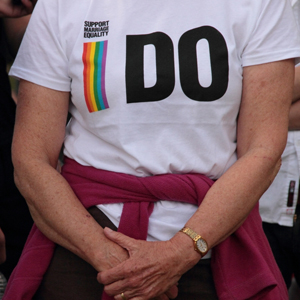 Same-sex marriages due to take place in Canberra this weekend are in doubt after the High Court reserved its decision on the Commonwealth’s challenge to ACT gay marriage laws.

The High Court is still considering the challenge, which has accused the ACT of enacting laws that are inconsistent with the federal Marriage Act 1961.

The Court has reserved its decision until next Thursday (12 December).

The ACT Legislative Assembly passed the laws in late October and the first weddings are due to take place on Saturday.

According to ACT Attorney-General Simon Corbell, same-sex couples planning to get married in Canberra this weekend can still do so because the Commonwealth did not seek an injunction.

However, ABC News reported that Corbell said the marriages could be deemed invalid when the High Court hands down its judgment next week.

In its submission to the High Court, the Commonwealth admitted that the full scope of the power to legislate all forms of marriage has yet to be determined in the Constitution. It argued, however, that “the better view is that the constitutional concept of ‘marriage’ includes a marriage between members of the same sex”.

The Commonwealth also claimed that the Marriage Act was intended to cover the entire field of marriage in Australia and prevents any state or territory from conferring the legal status of marriage if it is inconsistent with the federal Act.

“It is not open under the law of Australia for any other legislature to purport to clothe with the legal status of marriage (or a form of marriage) a union of persons, whether mimicking or modifying any of [the] essential requirements of marriage,” it said in the submission.

The ACT government, on the other hand, has claimed that the Marriage Act only covers heterosexual couples and does not explicitly prohibit state or territory laws from conferring the status of marriage on same-sex unions.

The Marriage Amendment Act 2004 defines marriage as the union of a man and a woman to the exclusion of all others voluntarily entered into for life, which the ACT government has argued limits the scope of the federal legislation.

Other than the ACT, Tasmania is the only other state or territory to have passed same-sex marriage laws in a house of parliament. The state’s lower house voted in favour (13 to 11 votes) of a Bill to legalise gay marriage in September 2012, but rejected it a few weeks later in the upper house by a vote of eight to six.

A bid to legalise gay marriage was also rejected by the NSW upper house last month, with MPs in the Legislative Council voting against it by 21 votes to 19.