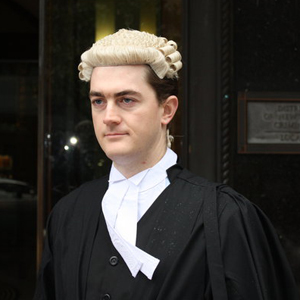 The barrister who stirred last year’s incorporation debate is now seeking to bring QC back to NSW.

John Hyde Page (pictured), who is not a silk, is rallying support in favour of allowing Senior Counsel (SC) in NSW to adopt the title of Queen’s Counsel (QC).

The move follows Victorian Attorney-General Robert Clark’s announcement last week (3 February) that silk appointees in the state will have the option of changing their post-nominal to QC.

However, the state’s laws pose a unique challenge.

Hyde Page said it was important to gauge the breadth of support from the Bar before campaigning for a legislative change.

A member of the NSW Bar Council, Hyde Page indicated that he has taken steps to start the debate in NSW. While he emphasised that Bar Council meetings are confidential, he did express his personal view that the QC title makes the Australian Bar more attractive to other common law and Commonwealth jurisdictions.

“I think by rebranding ourselves as QCs, Australian lawyers are far more likely to be able break into those markets,” he said.

Melbourne silk Caroline Kirton SC agreed with Hyde Page’s position. She told Lawyers Weekly that while she was initially opposed to bringing back QC, she has “reluctantly” concluded that the title has its commercial advantages.

Since taking silk in 2011, Kirton has focused her practice on international arbitration work and found, in her dealings with legal practitioners in Hong Kong and Singapore, that QC has “a real point of distinction”.

The title does not, however, carry the same weight in China, she pointed out.

“My experience has been that in many parts of China, practitioners don’t understand the difference between barrister and solicitor, so going into the nuances of SC and QC is superfluous.”

Even so, Kirton maintained that there is genuine confusion in the Asia-Pacific over the meaning of SC and has decided to change her title to QC now that Victorian silks have been permitted to do so.

“As a republican, this is not a step that I embrace, but I do so for commercial reasons … [QC] is the more easily identifiable brand at the moment than the ambiguity of what senior counsel is,” she said, citing the example of clients confusing SC with the special counsel title used by lawyers below partner level in law firms.

She also expects that a number of other silks in Victoria who oppose the title in principle will, like her, adopt QC for commercial reasons.

In 2013, 70 of the Queensland’s 72 senior counsel changed their title to QC following Attorney-General Jarrod Bleijie’s decision to reinstate the position.

Hyde Page commented: “Unless you’re prepared to believe that 90 per cent of the Queensland Bar are monarchists, which I don’t, it has to be that people recognise it’s a more prestigious title and a more recognisable title.”

One high-level silk is prepared to stand by the SC brand. Phillip Boulten SC, president of the NSW Bar Association, has expressed his strong support for the existing system of Senior Counsel.

“The NSW system involving the appointment of Senior Counsel is generally well understood and well regarded. Its strength lies in the fact that there is no need for Government approval of any appointments,” Boulten said in a statement.

He has also acknowledged, however, that developments in Victoria have made it appropriate for NSW to review its position.

This isn’t the first time Boulten and Hyde Page have taken opposing positions on a contentious issue. The pair butted heads last year over whether barristers should be allowed to incorporate – a motion that was quashed in September.

Kirton conceded that reinstating QC is “a backwards step” for the Bar. However, Hyde Page challenged that opinion.

“I don’t think that’s accurate … it’s no more anachronistic than the fact we recently appointed a new Governor General,” he said.

Other states that currently retain the SC title are: WA, SA and the ACT. The Northern Territory was the only Australian jurisdiction not to dump QC.