Don’t let them get away with it 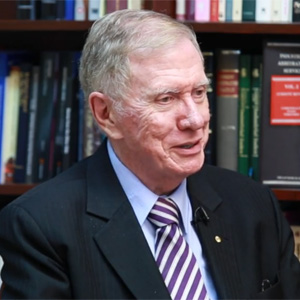 Michael Kirby remains optimistic that North Korea’s leaders will be brought to justice despite political protection from China.

Michael Kirby remains optimistic that North Korea's leaders will be brought to justice despite political protection from China.

Kirby (pictured), a High Court judge for 13 years before retiring in early 2009, was speaking to Lawyers Weekly (see the interview below) on a brief stop in Australia in the wake of handing down the United Nations Commission of Inquiry report into human rights abuses in North Korea last month.

The report said that human rights abuses in North Korea could be compared with the atrocities of Nazi Germany under Adolf Hitler. Included amongst the allegations are the deliberate torture, starvation and killing of thousands of people, including political prisoners. Some of the most shocking evidence heard by the Commission included eye witness testimony about the drowning of babies of mixed race.

“The witness that saw this saw the baby go upside down into a bucket of water and how froth from air bubbles [developed] around the mouth as the baby drowned,” said Kirby, who said that hearing such evidence moved him to tears.

Despite the weight of evidence levelled against the perpetrators of such human rights abuses, there is a good chance that North Korean leaders such as the Supreme Leader Kim Jong-un will never face the inside of a court room.

The report recommended that North Korea’s leaders be referred to the International Criminal Court (ICC) for trial.

For that to happen, a country has to be a signatory to the Rome Statute, the treaty that established the ICC, which North Korea is not. Alleged crimes can also be referred to the ICC by the United Nations Security Council.

Senior officials from China have castigated the report, making it likely that North Korea’s most powerful ally will use its power of veto at the Security Council to shield North Korea from international legal action.

“China is a very great country, with a great economy and an ancient civilisation, and China itself must not be very happy about having on its doorstep a country with nuclear weapons, rocket delivery systems, the fourth largest army in the world, and which disposed of the second most powerful man in the country, Jang Song Thaek (in December), by executing him within four days of arresting him,” said Kirby. “So one does not know what will happen in this matter, but that will be played out by politicians of states and bureaucrats and officials.”

You can watch Justin Whealing's interview with Michael Kirby by clicking on the video link below.

Michael Kirby was admitted to the Bar in 1967 before his appointment in 1975 as the deputy president of the Australian Conciliation and Arbitration Commission, when he started a 34-year career on the bench, culminating in 13 years as a justice of the High Court.

He has been following the recent debate about whether Australian state and territory jurisdictions should revert back to the Queen’s Counsel post-nominal for silks.

Queensland and Victoria have already offered silks the chance to have the QC post-nominal replace senior counsel, and the NSW Bar has flagged that it might soon follow suit.

“There are some people out there who would think of me as a red hot radical and a dangerous disturber of settled things, but in fundamentals,  I am actually quite conservative,” said Kirby, adding that he was “not very comfortable” with the way the Senior Counsel title was first introduced in his home jurisdiction of NSW over 20 years ago.

“Whilst Australia is a constitutional monarchy, I see no problem in having our senior lawyers called QC or KC (King’s Counsel) as they have been for centuries in our legal tradition.”

Kirby also talked about gender diversity and depression, and he urged Lawyers Weekly to continue to highlight both issues.

“I do applaud the fact that Lawyers Weekly has kept up this battle,” he said. “I am sure it must drive some of the older members of the legal profession, but not myself, crazy, the way you keep drawing attention to the disadvantages women still suffer in the legal profession.”

Kirby is currently in Jamaica attending United Nations events in his capacity as a member of the UN Aids Reference Group.

Don’t let them get away with it