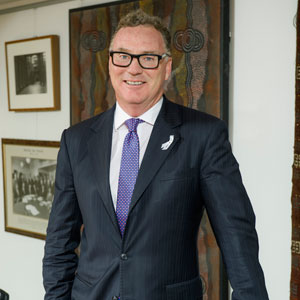 Respected members of the Victorian Bar have paid tribute to the outgoing chairman William Alstergren QC.

Alstergren was appointed chairman at the end of 2013, succeeding Fiona McLeod SC.

McLeod, who is currently vice president of the Australian Bar Association, told Lawyers Weekly that Alstergren had worked tirelessly during his term to develop closer relationships with solicitors and promote the strengths of the Bar.

One of the ways Alstergren did this was by meeting with law firms to seek their views on the role of the Bar and the profession generally. He then used that feedback to develop networking and CPD events aimed at improving engagement between the Bar and solicitors, corporate counsel and government lawyers.

McLeod commented that Alstergren had also fostered strong relationships with the judiciary: “Many – including our chief justice, Marilyn Warren, recently – have spoken of the warm relationship and support they and the courts have received from Will personally and from the Bar Council under his leadership,” she said.

“Will leaves with our immense appreciation for his extraordinary efforts on behalf of our Bar and for the energy and enthusiasm he has brought to all of his initiatives.”

Those initiatives include spearheading a joint conference with the Law Institute of Victoria in October. The event was the first of its kind and was attended by the Victorian attorney-general, Robert Clark, along with hundreds of barristers, solicitors and members of the judiciary. It included keynote speeches by respected judges and silks on topics such as current developments and challenges in conducting litigation in the Federal and Supreme Courts.

Speaking with Lawyers Weekly, the Victorian Bar’s new chairman, Jim Peters QC, said the event was a “resounding success” thanks to Alstergren’s efforts.

Peters also singled out the Victorian Bar President’s Dinner, which was attended by the state attorney-general and Justice Jack Rush, as another feather in Alstergren’s cap.

Alstergren has been the driving force behind other successful events, including the launch of the Melbourne Commercial Arbitration and Mediation Centre, which was considered an important step towards Melbourne becoming an international arbitration hub in the Asia-Pacific region.

He went one step further and established a new working group to bolster the Victorian Bar’s presence in international arbitration in Asia.

“The Bar has been reinvigorated as a result of his chairmanship,” said Peters, adding that he plans to continue Alstergren’s initiatives “in my own way, of course”.

Peters was the senior vice-chairman of the Victorian Bar during Alstergren’s term and the two men have worked closely together over the past 12 months.

He added that Alstergren is very inclusive: “He had Rudyard Kipling’s ability to ‘walk with kings, nor lose the common touch’.”

Alstergren’s legacy, however, will be his role in engaging the Victorian Bar with the wider legal profession, according to Peters.

“What he did was to focus the Bar to engage the profession, courts and government in a way that benefits all members of the Bar,” he said.