The recently elected president of the Australian Bar Association has outlined the organisation’s policy priorities for the coming year.

Patrick O’Sullivan SC, an Adelaide-based barrister, took over the ABA presidency from Fiona McLeod SC at the start of February.

Mr O’Sullivan told Lawyers Weekly he intends to continue lobbying on many of the issues championed by Ms McLeod, including Indigenous incarceration.

“The rate of Indigenous incarceration in Australia is a disgrace, and we will continue to work with the Federal Government as best we can to try and address the sort of issues that might be leading to this,” he said.

“It is a very complex area, but we can't just ignore it. We've got to keep working at it.”

In addition, he pointed to the “continuing problem” of legal aid shortfalls, especially in family and criminal law.

“The absence of legal aid really affects those who are most disadvantaged,” he said.

“In the criminal sphere, the continuing operation of the criminal justice system is in no small part due to the goodwill of the Bar and of the legal profession generally.”

He expressed bafflement as to why the government has been slow to address funding concerns.

“I'd like to come up with a definitive answer, but I'm not sure I have one just yet,” he said.

Another continued campaign for the ABA this year will be adopting a policy on equitable briefing, which is still in draft form.

“It will be a statement of principle that the ABA adopts and then encourages each of the states to adopt similar principles,” he said.

“Change must come from the top, although it can also come from other areas,” Mr O’Sullivan said. “But [the ABA] has got to lead by example.”

He pointed to the Victorian Bar as an example of progress on equitable briefing. Last year, it announced an Equitable Briefing Initiative in conjunction with members of the Judiciary and the Victorian Equal Opportunity and Human Rights Commission.

Under this policy, a number of firms and in-house legal teams committed to briefing women barristers at the Commercial Bar in equal proportions to the number of female CommBar members – around 28 per cent.

Over the coming year, the ABA will also look to strengthen Australia’s ties with its neighbours, particularly Singapore.

“I think it's important for us to be a key player in the region as a provider of legal services. Australian lawyers are generally well regarded and are there are opportunities, I think, in parts of Asia for us to engage with them at a closer level,” Mr O’Sullivan said.

He cited the growth of the International Commercial Court, the opening up of Asian legal markets to foreign lawyers and the presence of Australian arbitrators in Singapore as positive steps.

However, he suggested the ABA would continue to lobby overseas legal professions on certain issues, including the abolition of the death penalty.

Closer to home, another priority for the ABA this year will be engaging the government on Federal Court and Circuit Court appointment delays, as well as on rule of law issues.

In particular, Mr O’Sullivan suggested rule of law issues arose most often in relation to legislation around terrorism or geopolitics.

“No one denies that it's problem that we have got to make very sure that we adhere to the principles underlying the rule of law,” he suggested.

Mr O'Sullivan was admitted to practice in 1981. He spent a stint at the Attorney-General's Chambers in Hong Kong before returning to Australia in 1992. He was called to the Bar in 1997 and took silk in 2008. 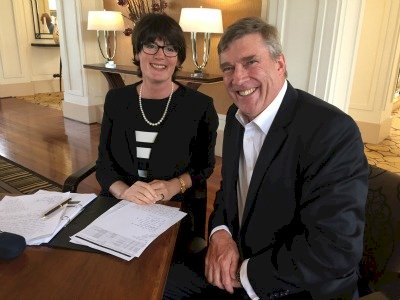