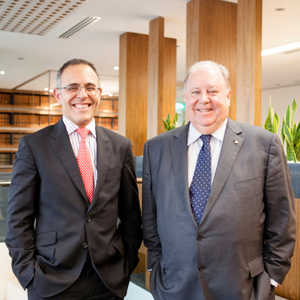 The former CEO of Santos, and former director of Telstra and the Commonwealth Bank, has joined the Kelly & Co business advisory council (BAC)._x000D_

The former CEO of Santos, and former director of Telstra and the Commonwealth Bank, has joined the Kelly & Co business advisory council (BAC).

Adler is also the international president-elect of the Chief Executives Organisation USA, a director of the Order of Australia Foundation and a member of the Board of Governors of the Institute for International Trade.

“In an outstanding career spanning over 45 years, Mr Adler has built a reputation as one of the most successful and distinguished businessmen in the state,” said Kelly & Co chairman of partners Jamie Restas (pictured left).

“Ross has served on the boards of many of Australia’s leading companies. His outstanding knowledge and experience within the national business landscape will be invaluable to Kelly & Co.”

Adler becomes the second member of the firm’s BAC, which has been established to further strengthen the firm’s links with the local business community and provide thought leadership to the partnership and its clients.

His appointment follows that of prominent businessman Rob Chapman, who was appointed to the position of chairman of the BAC in June.

The firm has experienced 30 per cent growth over the past year, with its revenue now approaching $25 million.