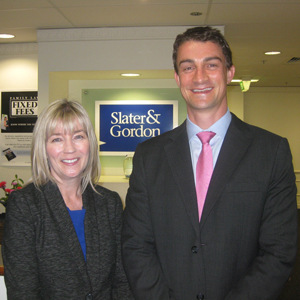 Slater & Gordon has made two senior management appointments in its Queensland practice.

Luke Short and Karen Simpson (both pictured) have been appointed general managers in the family law and personal injury areas respectively.

Both have been promoted from the positions of practice group leaders in the firm’s Brisbane office.

Simpson has been in a leadership role in Slaters’ Queensland practice since 2008.

She has a focus on workers compensation and, more recently, has had a key role in the Queensland personal injury practice. She has been a solicitor in Queensland since 1999.

“Law is a fascinating area, and providing access to justice to everyday people is something I enjoy,” said Simpson, who will assume the role of general manager (Queensland personal injuries) on 1 July.

Short’s role as general manager (family & relationship law) is a national role managing the rapid growth of the practice group across Australia.

The role involves managing lawyers and staff across nine offices in four states.

Short has spent 11 years working in personal injury law and said he was excited about working in a new area of law.

“I’m looking forward to expanding our footprint nationally and being able to offer affordability and certainty, as well as informing people of their rights and obligations in family law,” said Short, who assumed his general manager role on 1 April.