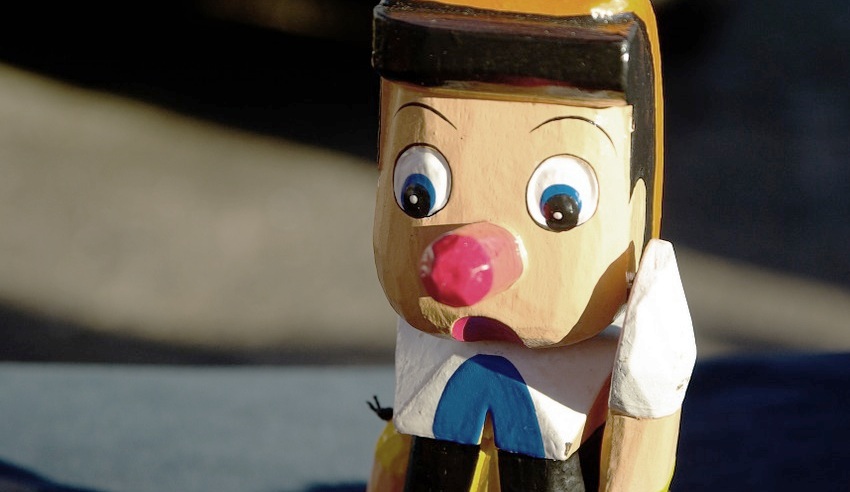 There should be an annual Golden Pinocchio award. Probably every reader of this piece could name a candidate for the award of the year’s greatest liar—the client they trust the least, or the boastful colleague, or their teenage son. The President? No politicians are too easy, writes Bob Murray.

Recently, the annual Gallup survey came out naming the professions which people think lie the most—but more of that later.

More immediately: How do you know your client is telling you the truth? Probably you don’t and besides you’re there to defend them, to argue their case, not to adjudicate their truthfulness.

As a behavioural neurogeneticist, I am fascinated by the biology of lying: by the genetics and neurochemistry of it. I am captivated by biological mechanics of the decision to lie. Mostly it’s totally unconscious—a habitual reaction to a stressful situation. Some people are genetically predisposed to lie more than others according to a famous twin study of 1996.

Almost every week there is an article in a newspaper, or magazine, or on a popular website claiming that the author has the secret of being able to infallibly tell when a person is telling the truth or not.

Nearly all of them are based on nothing more than hearsay. Some of the more ingenious of these are:

• People telling the truth can supply more detail than liars.

• If people look up to the left (or right in some versions) when they’re fibbing.

A recent study showed that over 70 per cent of people believe one of these (or something else equally simplistic). All of them are false.

Scientifically we know quite a lot about lying, and about the ways that lies are received. We know, for example, that people are more likely to lie if they are high up in an organisation than if they are lower down in the pecking order—it seems to be a frequent component of the famous “executive bubble”.

We also know that people can come to believe in their own lies—even when they know that they made it all up.

Lies can become part of our personality, part of our sense of self. To deny them is a threat to our ego. After a few retellings, untruths are accepted into a part of the brain called the orbitofrontal cortex (just behind the ear).

There they join with other fallacies that we believe and accept as true. A recent Harvard study showed that over 70 per cent of everything that we believe or assume to be true isn’t.

We loath to give up our assumptions. This reluctance is one of the reasons that we don’t really hear up to 60 per cent of what people tell us: our falsehoods are so tenaciously held that our brains literally block out anything that might contradict them.

No amount of evidence about evolution, for example, will convince a creationist that evolution is real.

Just a few weeks ago a study came out which showed that groups of people lie more than individuals and that even very honest persons, when put together into a group, will lie.

Why should this be? The truth (okay, let’s say the science) is that we don’t really care about truth. We care about two things: our individual safety and the survival and prospering of the group (or groups) we belong to. As the study says, an individual may not be likely to lie for personal gain, but put into a group—even a group of people he or she has never met before—they willingly become part of a collective of liars if their doing so will enable the group to prosper.

We are genetically predisposed to accept a group’s statements as more true than those of an individual. We are also, curiously, genetically programmed to accept as truth lies we are told by taller people than shorter ones, by those (male or female) with deeper voices, by more handsome (or beautiful) people and by those that we want to be part of our support network.

Victims of certain personality types can lie more convincingly than “normal” people. Psychopaths are a case in point. No one lies with more psychic ease than a psychopath. Fortunately they only make up 1 per cent of the population. However, as you go up the firm ladder they become more prevalent. Recent research suggests that fewer than 5 per cent of partners in law firms are probable psychopaths but among the really successful rainmakers—you know the ones—the percentage is considerably higher.

By no means is every rainmaker a psychopath, nor every psychopath a rainmaker. However the non-rainmaking psychopaths tend to get weeded out earlier before they’ve had the chance to do much damage.

Men and women lie equally—though usually about different things. Men lie to show that they’re better at sports, or seduction or business—or in the process of any of the above—and about their level of commitment (to anything). Women tend to lie about their age, their families or their contacts. Both genders lie about who they’re having sex with however. He will tell you (particularly if you’re another man) of the women he’s bedding, especially when he’s not. She will lie by omission about the men she’s sleeping with (especially if you’re her husband or partner).

A genetic analysis of children in Western societies not long ago found that roughly 25 per cent of all children were not fathered by the woman’s unsuspecting husband or partner (about the same percentage as so-called ‘monogamous’ female rock wallabies).

Finally in the league of lying professionals, I’m sorry to report that, contrary to popular opinion, lawyers are perceived to be nowhere near the top of the liars’ tree.

The Golden Pinocchio goes to politicians—especially members of the US Congress—closely followed by car salesmen, advertising practitioners and the folks who sell insurance. Also high on the list of liars as are business executives.

Languishing in 10th place are lawyers, who are just above journalists. Sorry about that.

The most trusted professions? Nurses, pharmacists and medical doctors (but not psychiatrists who rate just below the clergy but are still pretty much trusted).

And by the way, trust me, I am telling the truth about this survey. Curiously scientists don’t rate a mention.