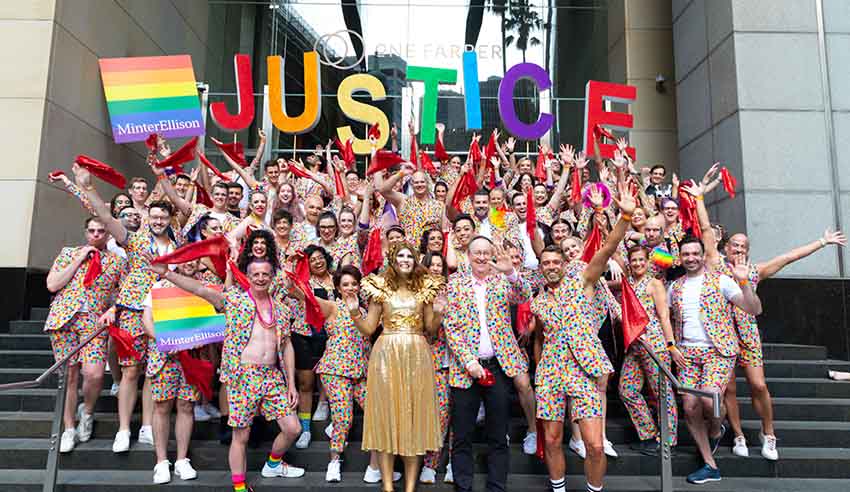 An Australian BigLaw firm has taken the next step towards improving diversity by playing a part in last weekend’s Mardi Gras celebrations.

MinterEllison became the first BigLaw firm to have its own float in the Sydney Gay and Lesbian Mardi Gras festival, which took place on Saturday, 29 February 2020.

Lady Justice stood tall at the helm of MinterEllison’s 2020 Mardi Gras float. It was draped in gold organza with MinterEllison lawyer Molly Thomas doing the honours, holding the scales of justice as she led 80 MinterEllison employees and partners through the parade.

The column of books constructed next to the statute bore titles like Pride, Respect and Inclusion. One spine, however, read The Book of Simon, in honour of the late MinterEllison lawyer Simon Cooper, who was instrumental in bringing the float to life.

The festival is profoundly important to many people – and so was MinterEllison’s first float.

“It was huge,” special counsel at Minters Jennifer Veiga said.

“It was so symbolic for those of us who have been around a long time and never thought we’d see a day like this.

“Yet it still celebrated everything that’s new and young about our community.”

Minters legal consultant Duncan McGregor who had attended the festival back in 1985 agreed that it was an important spectacle.

“It was a fantastic celebration,” Mr McGregor said.

“The festival is a safe place to really be yourself and have fun with people you love and respect – and frankly, people you’ve never seen before, too. It is a symbol,” he acknowledges, “but in some ways it’s also very real.”

Eric White who lives Singapore, working as a legal counsel for Allianz was a founding member of its LGBTQ+ network at MinterEllison, PRIME (Pride, Respect and Inclusion at MinterEllison).

According to Mr White, in the mid-2010s, the idea of a major law firm like MinterEllison having a float in the Sydney Gay and Lesbian Mardi Gras seemed ludicrous.

“We weigh up risks. And in those early days of PRIME, we were worried about pushing the envelope too far.”

Ms Thomas expects that the firm’s Mardi Gras float began to change that: “It really put the diversity even within our community on show.”

“I think a lot of professional women would have seen that and thought, ‘This is great – this is a chance for me to identify with something that’s so visible and powerful’.”

The theme of this year’s Mardi Gras was “What Matters?” and represented the great debate between the rights of Australians in the upcoming religious discrimination bill.

MinterEllison partner Gordon Williams supports the idea of outlawing discrimination based on religious belief – in principle.

But Mr Williams is worried about the potential of the religious discrimination bill to threaten LGBTQ+ Australians’ hard-won right to bring their whole selves to work.

“The principle is good,” Mr Williams says. “But the devil is in the detail.”

“As an employment lawyer, I can see this creating real difficulties for organisations trying to provide safe workspaces and appropriate cultures.

“There may already be a movement, but legislation makes it mainstream. And that’s also why bad law can take us backwards.”

“They can move backwards. You can see the United States as an example of that. We want to make sure that any legislation here doesn’t have the same effect.”

Asked if she was concerned about the bill Ms Veiga had a diplomatic view of the situation.

Right now, Ms Veiga is focused on the women’s sub-network she and Ms Thomas are developing within PRIME.

The Minters network is a way to tackle the intersections of disadvantage in the firm – the places where barriers pile up.

“There is still very much a glass ceiling, just as a woman,” Ms Veiga said.

“And so, there’s this underlying feeling sometimes that you already have this uphill road, you really want to add something else that may turn someone off.”

“It’s about the unique thing of having that experience, of being a woman in the workplace – which has its own challenges – while also identifying as LGBTQ+,” Ms Thomas said.