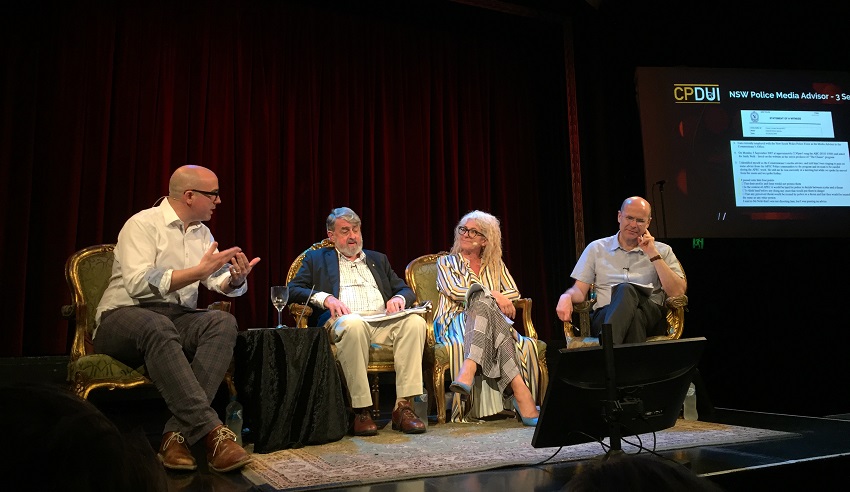 Julian Morrow, a former lawyer and a founding member of The Chaser, has delved into the group’s APEC stunt at a new CPD event.

The crew of ABC satire program The Chaser’s War on Everything outdid themselves with their notorious motorcade stunt at the APEC summit in Sydney in 2007, which Mr Morrow described as “the stunt that went horribly right”.

With a convoy of black cars and motorbikes, ingeniously disguised with small Canadian flags, the group were granted entry to the supposedly off-limits area of the CBD where world leaders were convening.

However, the jig was up when fellow cast member Chas Licciardello stepped out of a limousine dressed as Osama bin Laden.

Mr Morrow explored the legal fallout of the stunt at a new event he launched on Monday, 30 October: CPDUI (Continuing Professional Development Under the Influence).

Hosted at Giant Dwarf Theatre in Redfern, the APEC discussion was the first in the CPDUI series. The aim of the program is to deliver CPD in a livelier fashion than usual, incorporating comedy and, of course, alcohol.

Mr Morrow was joined on stage by barrister April Francis, who represented him in the APEC proceedings, Nicholas Cowdery AM QC, who was the NSW Director of Public Prosecutions at the time, and UNSW Law dean George Williams AO.

The panel explored the unique case, which hinged on technicalities of the APEC Meeting (Police Powers) Act 2007, as well as the bearing of special pieces of legislation such as this on civil liberties.

“The APEC Police Powers Act infringed upon civil liberties and the rights of citizens in quite significant ways, all in the name of security,” said Mr Morrow.

“And yet on the day, whether it was practicality or the fear of upsetting dignitaries, none of that mattered, and in fact it was an open door in terms of getting in there.”

Professor Williams said a disturbing trend has emerged in Australia in recent years of contentious legislation being rushed through Parliament.

“Certainly at the moment, when you’re dealing with national security, there’s this furious level of bipartisanship that means that … even before the bill gets to Parliament, even before we know what’s in the bill, there tends to be agreement between the major parties,” he said.

“They’ve reached such furious agreement that when the federal government says it wants a new anti-terror law, Bill Shorten, the Opposition leader, has taken to writing to the Prime Minister to say: ‘We look forward to seeing the details of the law but, by the way, we expect we'll pass it, just tell us the timing’, and it’s a blank cheque, essentially.”

Professor Williams said the best way to address overbearing legislation was with a bill of rights.

“Unless there’s a sea change in our politics on this ... we need something like a bill of rights that actually bites, that says there are things you cannot transgress,” he said.

“The absence of that explains why Australia is so exceptional, why our national security laws are actually often much worse than the US or the UK in these sort of areas, and there’s just no good reason for that.”

Julian Morrow recently appeared on The Lawyers Weekly Show to talk about satire, democracy and his time as a lawyer at a major firm – the constitution of which bears a striking resemblance to The Chaser’s own constitution.