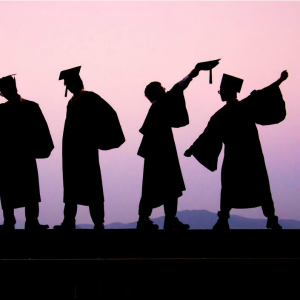 Education comes with a price tag but students with HECS-HELP often postpone worrying about their mounting debt until tax sneaks up and smacks them in the face in their first year out of uni.

For all those starry-eyed law students starting this week, Folklaw is here to give you the heads up on how much you will be out of pocket by the end of your degree.

A Bachelor of Laws costs around $34,827. This is based on the University of Sydney’s tuition fee estimate for Commonwealth-supported students, textbook cost estimates provided by the Sydney University Law Society, and the student services and amenities fee. Admission to this course is only available through a combined degree, which bumps the price up considerably.

Law students who wish to practise law must undergo further professional training, which can also be quite pricey. The College of Law’s practical legal training program, for instance, costs about $8,560.

That might sound like a lot of money, but don’t fret – studying for a Bachelor of Laws isn’t as expensive as medicine.

A four-year Doctor of Medicine at the University of Sydney costs around $42,064 in tuition fees alone. This is a postgraduate-only course, which means students need to have covered the costs of a bachelor's degree already, which can add up to anything between $18,456 and $35,072, according to the University of Sydney's website.

So, is a university degree worth the financial investment? Absolutely – having a degree sets you up for a much higher income over your lifetime. In the first year out of uni alone, law graduates in full-time employment earn $53,000 on average.

Unfortunately, law graduate employment is at a record low and one quarter of law grads who wanted a full-time job in 2014 could not find one within four months of finishing their degree.

However, the long-term employment prospects are good for university graduates in general: only 3.2 per cent are unemployed compared with 8.2 per cent for those with no post-secondary qualifications, according to the Australian Bureau of Statistics.

Folklaw fears that the federal government’s move towards deregulating university fees and introducing real interest rates of up to 6 per cent on student loans in 2016 will significantly increase student debt.

While the impact of such policies is largely unknown, economists and the Labor Party have predicted that it will push law and medical degrees over the $100,000 mark.

Figure 1: The cost of a university degree compared with the average annual salary of a graduate under the age of 25 in full-time employment. (Source: The University of Sydney and Graduate Careers Australia's GradStats report 2014) 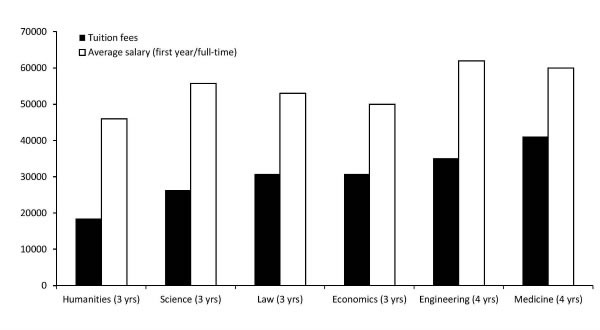