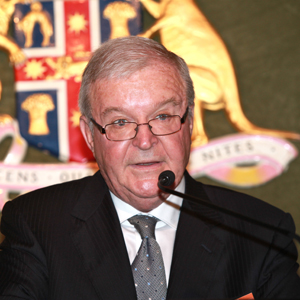 NSW chief justice Tom Bathurst and Craig Pudig, the head of litigation at the Macquarie Group, are among six high-profile panellists taking part in a legal conference next month.

The conference, titled Commercial Dispute Resolution – The 2020 Vision, will be held in the Sydney offices of Gilbert + Tobin on Thursday, 7 June. The panel will discuss topics relevant to the future of alternative dispute resolution (ADR) and commercial litigation in Australia.

Bathurst’s presence on the panel comes hot on the heels of some forthright comments he made about the culture within private practice law firms last month.

At the Commonwealth Lawyers Association Regional Law Conference in Sydney on 21 April, Bathurst said the Australian legal market was being “colonised” and “invaded” by large overseas firms, which, he claimed, was having a deleterious effect on the conduct of private practice lawyers in large law firms.

“It is difficult, if not impossible, to assess the worth of peers other than through revenue generation,” he said. “This creates serious ethical challenges. Young lawyers have little or no interaction with clients. They are motivated to bill as much as possible in the interests of career advancement.

“This conflicts with their professional duties to act honestly and efficiently.”

The litigation landscape in Australia has changed significantly over the past few years, with use of ADR in commercial and other litigation now being championed by many legal bodies and by Parliament.

In 2010, the Standing Committees of Attorneys-General adopted the United Nations Commission on International Trade Law (UNCITRAL) model to govern Australia's domestic commercial arbitration system. In August 2011, the Civil Dispute Resolution Act was passed by Parliament to encourage parties to resolve disputes before they get to court.

“These changes will increase access to justice for the community by encouraging realistic - and less costly - alternatives to litigation,” said the former Attorney-General, Robert McClelland, last year.

Australia has also become a more influential figure on the global arbitration stage.

In 2010, the Australian International Disputes Centre was opened in Sydney (AIDC), joining Hong Kong and Singapore as a regional arbitral seat to hear cross-border commercial disputes.

In 2011, Clayton Utz partner Doug Jones became the first Australian to be appointed as the president of the Chartered Institute of Arbitrators, a global association of more than 12000 arbitrators.

Australia was an international leader in developing a National Advisory Committee on ADR and national practice and training standards for mediators. However, there is a growing feeling of discontent within the legal community that Australia is now lagging behind the European Union and other jurisdictions by not mandating the use of mediation more thoroughly in commercial disputes.

Topics to be discussed by the panel will include whether the courts should conduct more or less ADR and innovations in court processes that might enhance commercial dispute resolution in the future.

Tickets to attend the event are available for $50 and are strictly limited.

To register, go to www.thetrilliumgroup.com.au