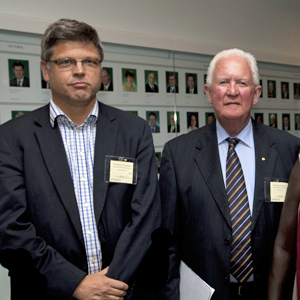 The Australian Lawyers Alliance has condemned the Senate's rushed passing of new laws extending intervention powers in the Northern Territory by a likely 10 years.

The Australian Lawyers Alliance (ALA) has condemned the Senate's rushed passing of new laws extending intervention powers in the Northern Territory by a likely 10 years.

The ALA yesterday (2 July) issued a 14-page ‘Statement of Incompatibility’ on the Stronger Futures legislation, after it was passed in the early hours of the morning on June 29, the final day before Parliament's winter break.

“Our statement shows where the Minister’s office has got it wrong and just how badly this legislation impacts on Aboriginal lives,” said ALA national president Greg Barns (pictured left).

“The rushed recklessness on the part of Government and Opposition MPs to surreptitiously push this through Parliament shows an awareness that [they have got] it wrong.”

Green party leader Christine Milne criticised the Government for bringing up the debate at short notice, in an 11th hour addition to its agenda, amid the media flurry over asylum seekers.

Green attempts to halve the sunset clause from 10 to five years and make other significant amendments to the laws were defeated.

“[This represents] a dark day in Australian politics for indigenous human rights – but the fight is not over,” said Barns, who has advocated against the legislation alongside the likes of former Family Court of Australia chief justice Alistair Nicholson AO QC (pictured right) and Alice Springs community leader Barbara Shaw, since before it passed through the lower house on February 27.

The laws include jail terms for alcohol possession and ac ontroversial program that cuts welfare payments to parents whose children do not attend school.

Indigenous leaders, NT communities, the United Nations High Commissioner for Human Rights and Amnesty International have challenged the laws and called for a human rights test.

The ALA claims the Government understood but ignored international guidance offered by the UN on “special measures” contained in the three bills which make up the Stronger Futures legislation.

“There is no standard by which [these special measures] can be measured or attained, including by reference to data or evidenced research. These two components are suggested by the UN Committee on the Elimination of Racial Discrimination in General Recommendation 32,” reads the ALA statement.

Barns said the Government’s “selective reference” to General Recommendation 32 could not be relied upon in a court of law.

Nicholson has also said he believes the Government's use of special measures could fail a potential High Court challenge.