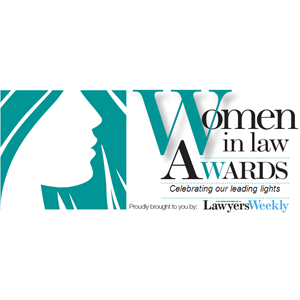 Finalists across eight contested categories have been selected from more than 100 submissions for the inaugural Lawyers Weekly Women in Law Awards.

Finalists across eight contested categories have been selected from more than 100 submissions for the inaugural Lawyers Weekly Women in Law Awards.

Clayton Utz and Corrs Chambers Westgarth lead the charge from the private practice firms, with nominees in three of the five categories open to law firms.

In the latter award, Wedutenko is joined as one of the six finalists by Corrs partner and chairman Teresa Handicott. Partners from Minter Ellison, King & Wood Mallesons and Norton Rose, as well as Stephanie Lynch from the Canberra-based firm Meyer Vandenberg Lawyers, are also in the running for this Award.

Corrs also has Christine Covington selected as a finalist in the Jacinta Fish Legal Mentor Award, and it is also one of six firms vying for the coveted Negocio Resolutions Law Firm Diversity Award.

AdventBalance, Freehills, Gilbert + Tobin, Maurice Blackburn and Slater & Gordon are the other finalists in this category.

A total of 19 law firms have nominees selected as finalists, with Gilbert + Tobin and King & Wood Mallesons the only other firms to have multiple finalists.

Barristers raise the Bar
Lawyers Weekly received a number of submissions nominating barristers across several categories.
Francis Burt Chambers in Perth has two finalists, with Gail Archer SC a finalist in the CCH Barrister Award and Clare Thompson one of six finalists in the Jacinta Fish Legal Mentor Award.

Some of the most respected and senior members of the profession were nominated for the Jacinta Fish Legal Mentor award, which recognises the efforts of female lawyers who devote much of their time to furthering the careers of their female peers.

In addition to Covington and Thompson, the other finalists include: Rashda Rana, a barrister with Ground Floor Wentworth Chambers and a former general counsel with Lend Lease Project Management & Construction; Dr Helen Durham, the head of international law and principles with the Australian Red Cross; Antoinette Kennedy, the former chief judge of the District Court of Western Australia, and Gina Cass-Gottleib, a partner at Gilbert + Tobin for almost 20 years. Cass-Gottleib was also the first female partner appointed at the national firm.

Lawyers Weekly sincerely thanks the enormous effort all nominees made in making submissions for the inaugural Lawyers Weekly Women in Law Awards.

The Awards ceremony will be held at Zinc Bar, Federation Square in Melbourne on the evening of Friday 19 October.

Tickets are still available for this prestigious event, with information on how to purchase tickets and on all the Award categories here.

The Awards ceremony will also include the naming of the Allied Recruitment Solutions Lasting Legacy Award winner, which was an uncontested category.

The president of the Australian Women Lawyers, Kate Ashmor, will be the night’s MC and Caroline Counsel, the immediate past-president of the Law Institute of Victoria, will make the keynote address.