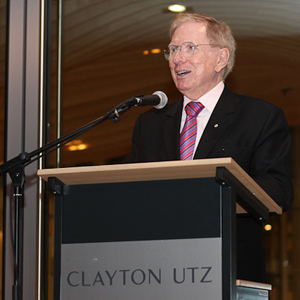 Michael Kirby has suggested Australia could learn a lot from the way the High Court of Delhi uses technology.

The former High Court judge (pictured) was speaking on the deck overlooking Sydney Harbour at Clayton Utz last night (8 October), as the special guest at the 30th anniversary gathering for the NSW Society for Computers & the Law (NSWSCL).

He described a visit he took earlier this year to the High Court of Delhi in India, which brings the rule of law to one billion people. He explained how the court is now set up with computer facilities and each judge has a “bench book” similar to an iPad because the Court was becoming “crushed” by the amount of paper passing through.

“That reminded me of an occasion at the High Court of Australia,” he said.

“Following Wik there started to be quite a series of cases … concerning what different legal title applied the Wik and Mabo principle and at that time the registry of the High Court suggested to the justices that we should have a computer pad because the legal papers were getting very, very voluminous.”

Despite him calling for those who wanted to try it to do so, Kirby said there were other justices opposed to the idea of using computer facilities.

“It had to be all equal and we all had to work off the same thing, so nobody got it and to this day paper still rules in the High Court of Australia, so there is a project for the Society,” he said.

The NSWSCL has around 525 members and is made up of lawyers in private practice, in-house counsel, students, accountants and people interested in and working in policy related to IT policy and law.

Anne Petterd, a special counsel in the technology, communications and commercial team at Baker & McKenzie in Sydney, is the Society’s president.

She said the society recently held seminars on the Government’s data retention proposals, the Optus TV Now decisions and the Samsung Galaxy Tab injunction; the latter of which could almost be described as "old news” given the pace of superseding technology.

The Society, which is run by volunteers, also produces a journal and awards an annual student prize for the best article in the field of computers and the law.

Kirby told the crowd of around 150 people that his role as chairman of the OECD Expert Group on Trans-border Data Barriers and Privacy Protection was one of the most wonderful opportunities he’d had in his career.

But, he explained, it was a big accident that led him to gain the role more than 30 years ago.

“The Australian Law Reform Commission (ALRC) was in danger of being abolished at the time the Whitlam government was dismissed and the commission survived because Bob Ellicott, who was the shadow AG, conceived the idea that one of the important projects that should be done by the Commission was  a project on privacy,” said Kirby.

As the ALRC’s first chairman, Kirby received a series of projects from Ellicott, of which a common theme was technology and the law.

Soon after the Australian project commenced, the OECD set up a working party to look at specific issues of privacy as they were relevant to the inter-continental society of the OECD.