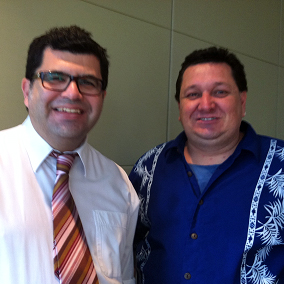 A law student clerking at Sydney law firm Carroll & O’Dea has been mentoring an ex-prisoner through a unique humanities university program.

“It’s a wonderful tool to bring people out of the position they’re in and to empower them to make a contribution to society; to lift their self-esteem,” said Paras.

Founded by the late Earl Shorris, a social critic and author, the Clemente Course offers disadvantaged people a curriculum of philosophy, history, art, literature and logic, for free.

Since 1995, the program has been introduced in about 20 US cities as well as in Australia, Canada and Korea, with the aim of teaching reflection and critical thinking, and breaking the cycle of poverty.

Each week during the semester, Shayne came into Carroll & O’Dea’s offices to talk his essays and assignments over with Paras, who is himself currently in his final year of law at Macquarie University.

“I was more of a sounding board for him to help put his ideas in action,” said Paras, adding that one of the hardest things for all students is actually starting an assignment.

The pair had some heated debates, especially during Shayne’s philosophy unit.

“I found it very interesting and we had different philosophical views on different issues, but that was a good way to explore his own thoughts and give him the capacity to put pen to paper,” said Paras.

Shayne always had an urge to study but having constantly moved around in his childhood, attending a total of nine primary and five high schools, he felt on the periphery of the school system, “branded an idiot by teachers” and unable to see the point in trying at school.

After being asked to leave school, he said he graduated to crime and drugs but, unlike some of his some of his friends and his brother, never did the “hard stuff” that eventually killed them.

At age 18, after a number of break and enters, Shayne ended up in Long Bay Jail, an experience he hopes never to repeat and one that “scared the fuck out of me”, he said.

Despite these obstacles and being diagnosed with post-traumatic stress disorder due to physical and mental abuse at the hands of his family, Shayne gave up his time to volunteer at various community organisations.

Paras said he and Shayne broke down barriers quickly and he learned about the world through his tutelage of Shayne.

“I distinctly recall him saying that his family and friends just would not believe that he was a uni student. It really does change lives,” said Paras, adding that it was rewarding to see a difference in Shayne from year to year.

Paras has volunteered to mentor another Clemente student this year as the firm continues its ongoing relationship with ACU and the course.

Shayne plans to share his knowledge by teaching English to refugees in Western Sydney, an initiative he became aware of through his time at ACU.

“What I’m learning is that revelations, at least in my case, are a slow and progressive thing … I still have moments when things threaten to overwhelm me but they’re just moments, I know they will pass, I can ride them out and focus my attention on moving forward,” said Shyane.