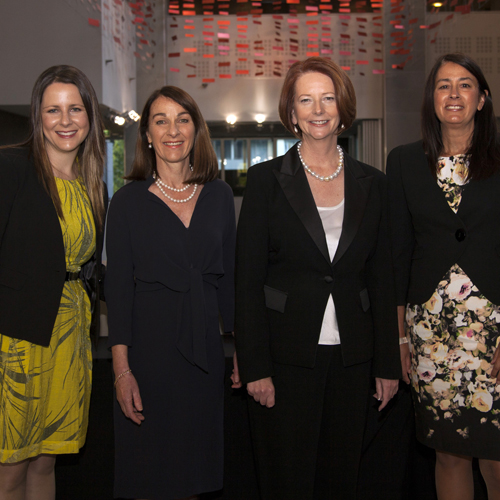 Minter Ellison hosted 150 guests, including the Prime Minister, at its inaugural Canberra Women in Government function on Friday (22 October).

Minter Ellison hosted 150 guests, including the Prime Minister, at its inaugural Canberra Women in Government function on Monday (22 October).

Women partners from Minters offices around the country attended alongside Julia Gillard, ambassadors, Commonwealth Government department secretaries, and leaders in the public and private sectors

The firm’s Women in Government program is designed to build connections between business and women who work in, for and with all levels of government.

It was launched in the Sydney office in 2008 and is now being rolled out in offices throughout Australia.

The high point of the evening was an informal conversation between Gillard and Fran Kelly, presenter on ABC Radio National, during which the PM canvassed issues across the now famous misogyny speech, coping with robust discussions at COAG, and the increasing number of women in positions of influence, including the High Court.

“Julia Gillard is living proof that girls can do anything,” said McCormick.

Last month, in her speech to the United Nations General Assembly, the Prime Minister referred to her commitment for Australia to work with Pacific Island nations on an unprecedented gender initiative – the Pacific Women Shaping Pacific Development project.

“Australia is providing $320 million to support women’s political participation, to expand women’s leadership and to spread economic and social opportunities in the Pacific,” said McCormick, adding that Australia has been a trailblazer when it comes to women in public life.

“Looking around the room, I reckon if we had a mind to world domination, we could do it.”