Home/
News/
Saddle up for good cause 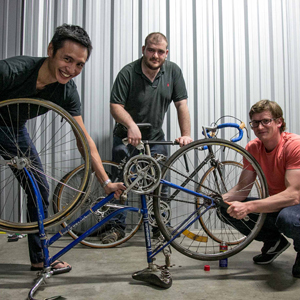 Three young Sydney lawyers are out to prove that legal professionals wheely do have hearts.

They, along with their computer programming pal, are the brains and hands behind Second Cycle, a non-profit organisation that takes second-hand bikes, fixes them up and redistributes them to those in need through the Red Cross and Asylum Seekers Centre.

“They are all bespoke; each bike is based on a request,” Eugene Tan, lawyer and Second Cycle director,explained.

“[Many of the bikes] got to newly-settled migrants, or people who might not have the cash for a bus ticket or train ticket,” he continues.

Eugene met his fellow lawyers-cum-bike-Santas Lee and Dave (and computer programmer Jack) while at university; they all had an interest in cycling and so decided, post uni, to put their skills and knowledge to a “more practical use in the community” and “keep alive our other skills in other part of our lives and have that balance of interests”.

The struggles lawyers face in achieving work-life balance is frequently reported on and Eugene does admit that running Second Cycle is a “very large commitment” but says that both he and his fellow bikies receive a lot of support and understanding from their firms.

At the moment, Second Cycle is completely self-funded and relies totally on support from sponsors and volunteers to fix up the bikes; the generous directors then even dip into their own pockets to buy a brand new helmet to go with each bike.

Eugene reveals they have applied for government funding and says “we would love to expand if we got funding”.

Second Cycle gave out five bikes within the last month and “we would hope to have given out 50 by the end of the year”, Eugene revealed.

Those interested in helping can do so by donating an old bike or by ‘adopting’ a bike, which they commit to fixing up depending on their skill level, and Eugene says they are always happy to hear from volunteers or those willing to donate.

For more information, or to donate, contact Second Cycle by visiting http://www.secondcycle.org.au emailing This email address is being protected from spambots. You need JavaScript enabled to view it. or calling (02) 8005 6804.