Home/
News/
Change is on its way

Change is on its way 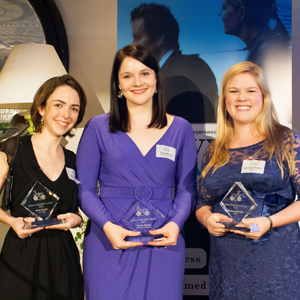 The domination of female lawyers at the inaugural Lawyers Weekly 30 Under 30 Awards signifies a new era for the profession.

Sixteen of the 30 winners on the evening were women, illustrating that much of the young talent within Australia’s leading law firms is female. In two categories, the Energy & Resources Award and the In-House Award, all three winners were female.

“It’s so exciting; a real shock and a real honour,” said Sally Weatherstone (pictured right), a senior associate at Gadens and one of the three Energy & Resources Award winners, along with Silvia Canetti from Norton Rose Fulbright (left) and Emma Murray (middle) from McCullough Robertson.

Around 300 people attended the Awards at the Ivy Sunroom in Sydney – a sell-out crowd. Managing partners and senior partners joined young lawyers from a number of firms who attended to support the 56 finalists from 24 law firms and corporations represented among the finalists.

“I felt very honoured because of all the amazing people who were nominated; I also felt very honoured that a number of members of my team came to support me,” said Nicola Cosgrove, a senior associate from Norton Rose Fulbright, who was one of the winners of the Banking & Finance Award, proudly sponsored by EA International. “It was great. I’ve worked with the same team for six years.”

The Lawyers Weekly 30 Under 30 Awards were open to lawyers throughout Australia in private practice and in-house who were under 30 years of age on 14 June 2013, the night of the Awards. Three winners were selected from each of the 10 categories. Not just about the big firms
Specialist boutiques and one-office firms joined the biggest global law firms on the winner’s podium.

With 10 finalists, Norton Rose Fulbright duly dominated the private practice awards, with five winners. They just edged out Corrs Chambers Westgarth, who had four winners selected from its six finalists. Gilbert + Tobin and Minter Ellison each had three winners, with Gadens Lawyers and Herbert Smith Freehills having two winners. A total of 14 law firms were represented among the 27 private practice winners. Michael Russell, a 28-year-old senior associate from Colin Biggers & Paisley, was one of the Insurance Award winners (Russell is pictured on the far right with the other Insurance Award winners {l-r}, Philippa Briggs from Minters, Daniel Davison from Norton Rose Fulbright and judge David Lee, the president of the Insurance Law Association of Australia).

“It’s really great to see the boutique firms getting some recognition,” said Tobias. “I think it’s just a different kettle of fish; the big firms have strengths in many areas whereas we try to concentrate our strength in one area and we do a good job at it.”

New South Wales had the most winners (12), with Queensland matching Victoria’s total of seven winners.
Western Australia had three winners and Danielle Arnfield, a corporate lawyer with Premium Wine Brands – Pernot Ricard, was the only winner from South Australia.

The 27-year-old Arnfield was also the youngest winner.

The other two In-House Award winners were Amy Nason from Telstra (pictured right with Arnfield) and Khalida Popal from AngloGold Ashanti Limited. Congratulations to all of the Lawyers Weekly 30 Under 30 Award winners:

Change is on its way