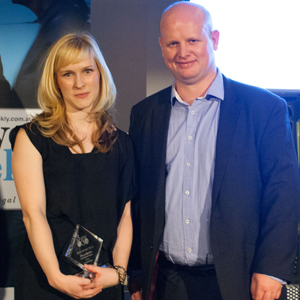 The M&A Award winners demonstrated that being young is no barrier to doing major legal work.

Seaton was the only one of the three winners in the M&A category, proudly sponsored by Charterhouse, who was able to attend the Awards at the Ivy Sunroom in Sydney’s CBD on Friday (14 June).

“It was very exciting and it was a bit of a surprise [to win the Award] because everyone else was such great candidates,” Seaton said at the event.

Seaton (pictured with Daniel Stirling from the Award’s sponsor, Charterhouse), who was the main non-partner lawyer that worked on the Centro Group restructure, described the opportunity to work on a deal of that magnitude so early in her career as “fantastic”.

“It’s a pretty great opportunity to get so much responsibility as a junior lawyer and just learn so much and work with so many great people, not just within the country but also overseas, and [to have the opportunity] to learn so much from all of them,” she said.

Seaton earned high praise for her role in the restructure, being described by HSF’s lead partner on the matter, Rebecca Maslen-Stannage, as “one of the most technically proficient lawyers I’ve dealt with”.

Nicholls was unable to accept his Award in person because he has just commenced a six-month secondment as an ambassador lawyer to the M&A team at AZB & Partners in Mumbai, India.

Nicholls has been involved in three successful appearances before the Takeovers Panel; is a co-founder of the Corporate Control Forum, an annual thought leadership event; was awarded a Corrs Scholarship for Individual Excellence to allow him to undertake the Learning to Lead program at INSEAD in Fontainebleau, France, and is also undertaking Mandarin tuition.

Fisken could help Nicholls out with his Mandarin as he has lived in China, studied Chinese and coordinates Norton Rose Fulbright’s China Focus Group. He has also coordinated due diligence for a $364 million matter for Asahi and was subsequently seconded to the company.

He described his role working on Ansteel’s more than $1 billion investment in Karara Mining as one of the greatest achievements of his career so far.

“My ability to read and write Chinese has meant that I have been heavily involved in all aspects of Ansteel’s Australian transactions,” he added.

The other finalists in this category were Gilbert + Tobin’s Alex Kauye and Geoff Peterson and Ashurst’s Patrick Nicholas.