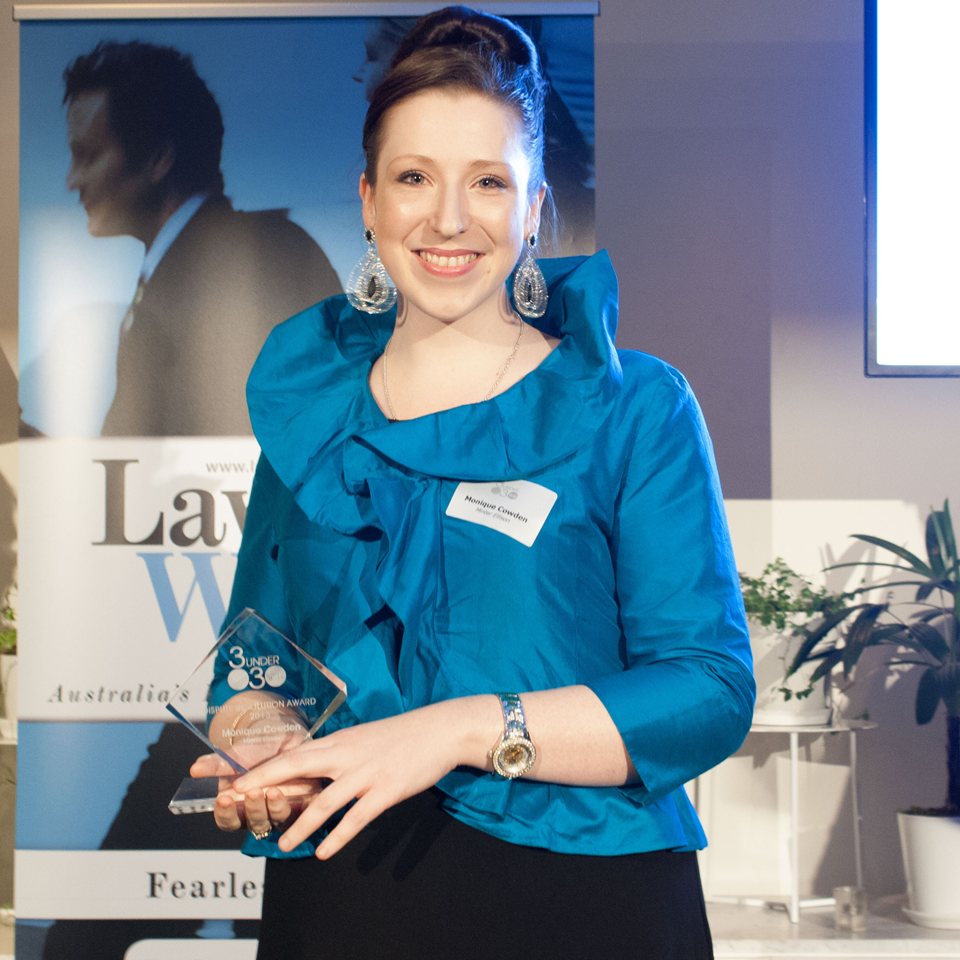 Three commercially-minded young dispute resolution lawyers were recognised for their achievements at the inaugural Lawyers Weekly’s 30 Under 30 Awards on Friday night (14 June).

Monique Cowden (pictured) from Minter Ellison in Sydney, Claire Schneider from Norton Rose Fulbright in Brisbane, and Duncan Marckwald from Corrs Chambers Westgarth took home the coveted awards at the ceremony in the Ivy Sunroom in Sydney.

“I know a lot of lawyers that could have equally have deserved to win this Award, so I feel very lucky,” said Marckwald, who was recognised for his leadership in Corrs’ Brisbane disputes team, including his recent work on a $360 million matter for Peabody Energy.

Cowden’s application stood out for the achievements it held, but also for its flair.

“Long gone are the days of musty legal practitioners drafting missives from ivory towers – the modern lawyer needs to be bright, commercial and personable,” she said in her submission.

Marckwald agreed and said practitioners must think more broadly about possible resolutions at the start of every matter.

“Lawyers need to give honest advice at the very start of a matter and think strategically about where the matter’s going to go before it gets trapped in the process of just following each step as it goes along,” he said after accepting the Award.

Schneider highlighted in her application how the advent of electronic communication has significantly upped the number of “documents” that may be relevant to a dispute and that, therefore, need to be reviewed and potentially disclosed in compliance with various court rules.

“Dispute resolution practitioners have an obligation to explore the implementation of software and outsourcing solutions … in an attempt to address the increasing costs and delays experienced by clients,” she said.

From 13 completed applications, the remaining three finalists were: Ashurst’s Emmelene Gray and Paul Walker, alongside Ben Kiely from King & Wood Mallesons, who all received high scores from the judges.

Pro bono a point of difference

Schneider’s leadership in a matter for Allied Gold Mining in 2011 and her current role defending Rio Tinto in the NSW Supreme Court stood out, but the judges were further impressed by each of the winners’ community service.

As well as running Corrs’ involvement in the Self- Representation Service, Marckwald has given up his time over the past 12 months to volunteer at a QPILCH Refugee Legal Clinic.

While maintaining relationships with clients like Westpac, ANZ, CBA, St George, Ernst & Young and Qantas, Cowden has also made time to mentor students in the Lawyers Encouraging and Assisting Promising Students program run by the NSW Department of Education and Training.

A picture of elegance in a high-necked, royal-blue top on Friday, Cowden’s fellow lawyers may not have guessed she plays dodgeball on weekends. Her recent exploits in a tie-break game allegedly left her on crutches, which may have helped demonstrate her commitment and dedication to the judges.