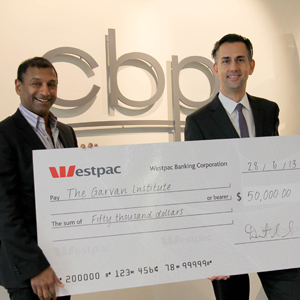 Colin Biggers & Paisley is ramping up its charitable work with the Garvan Institute of Medical Research, starting by doubling its annual partner donation to $50,000.

Speaking with Lawyers Weekly, de Souza said the firm is concentrating its charitable efforts on Garvan, which, he claimed ,“means we can make a real difference”.

He added that directing the attention of firm staff to one cause also improves engagement with fundraising activities.

In addition to cash donations, many of the firm’s lawyers perform pro bono work for Garvan. While de Souza admitted that CBP does not have a formal pro bono program, he intimated that he would be open to the idea if it was suggested by the firm’s pro bono committee.

CBP also raises funds for Garvan by entering teams into the City2Surf, selling artworks displayed at the firm’s Sydney office and inviting staff to donate through a workplace giving program.

“To start a project and find out if something has legs, [researchers] need funding,” he said. “Government funding kicks in once initial funding is done.”