Home/
News/
Mentor to thousands acclaimed by many

Mentor to thousands acclaimed by many 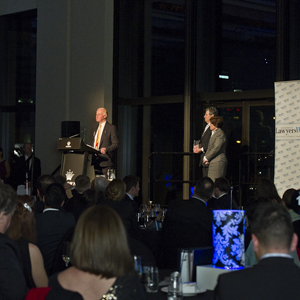 Legend is a term bandied about far too frequently, but it is an appropriate moniker to describe this year’s Michael Kirby Lifetime Achievement Award winner.

“I think lawyering is very much an apprentice system,” said McCallum on accepting the Award and reflecting on a career in legal academia that has spanned 41 years and counting. “Our job is to help them along the beginning of the road, learn some law and, more particularly, think like lawyers.”

McCallum has had to overcome blindness in walking down his legal road, enrolling in a law degree at Monash University in 1967 in his home city of Melbourne.

McCallum took a posting at Monash after graduating, establishing himself as a legal Australian labour law academic.

After 19 years at Monash, McCallum was appointed as the foundation Blake Dawson Waldron Professor of Industrial law at Sydney University in 1993. He was later dean of the law school from 2002 to 2007.

This marked the first time a totally blind person was appointed by any university in Asia to a full professorship in any discipline or as the dean of law.

Today, his wife, Professor Mary Crock from the University of Sydney Law School, has a hand in ensuring his expertise is not lost to budding practitioners.

“This year I was teaching administrative law again even though I am a retired Emeritus professor,” he said.

“We were short [staffed] and my wife, Professor Crock, was in charge of the course and she said ‘darling, you can do another year’.”

Family has always been a very important part of McCallum’s life.

In 2011 he told Lawyers Weekly that, despite teaching thousands of students, his greatest achievement has been marrying his fellow law professor Mary Crock and having three children. “It’s our living and interaction with people, and the moment of being with people, that really counts in life,” he said.

McCallum’s wife Mary and their three children were in attendance to see him receive this Award.

“Those of you who have grown-up children, do you realise you can never find them in the one place altogether?” said McCallum shortly after taking the podium to accept the Award. “Well, we finally have our three children, Gerard, Daniel and Kate, together at last after three years. Daniel flew in from Los Angeles this morning.”

A man for others
As a high-profile Australian with a disability, McCallum, the 2011 Senior Australian of the Year, has sought to be an advocate for the disabled.

In 2008 he was elected to the first United Nations Committee on the Rights of Persons with Disabilities, serving as the committee’s chair for three years.

He is currently the committee’s vice chair.

“Our job is to look at what countries around the world are doing for the rights of its persons with disabilities,” he said. “It has been my honour to lead the dialogues with these countries as different as Tunisia to Hungary to China.”

In closing, McCallum, the inaugural president of the Australian Labour Law Association and a former Asian regional vice president of the International Society for Labour and Social Security Law, paid tribute to some other legal legends.

“I am honoured to join esteemed past [Michael Kirby Lifetime Achievement Award] winners such as Elizabeth Evatt and Sir Laurence Street, and I am even more overjoyed to receive an Award named after Mary’s and my friend, and no doubt a friend to many of you all.

“I have known him for 35 years and he is the most marvellous man, Justice Michael Kirby.

"Bless you, thank you and all the best.”

Mentor to thousands acclaimed by many