Home/
News/
Turn back the bias

Turn back the bias 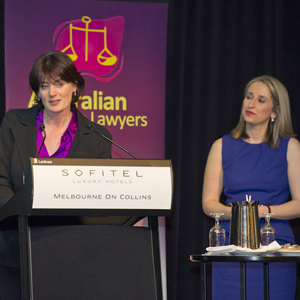 The Lawyers Weekly Women in Law Awards saw prominent lawyers urge firms and the Bar to look past gender for sexy and high-profile work.

The Lawyers Weekly Women in Law Awards saw prominent lawyers urge firms and the Bar to look past gender for sexy and high-profile work.

Around 200 people were in attendance at the Sofitel Hotel in Melbourne on Friday night (18 October) at the second annual Lawyers Weekly Women in Law Awards.

The keynote address was provided by Amy Challans (pictured below), the new head of Australian Women Lawyers. She told an audience that included senior silks, members of the judiciary, law firm managing partners and some of Australia’s best young lawyers that the profession can’t just focus on changing male attitudes in promoting diversity.

“I believe one key strategy lies in the hands of women themselves,” said Challans when speaking about how to tackle entrenched discrimination in the profession.

Around 60 per cent of law graduates are women, yet just under 20 per cent of barristers are female, and around 17 per cent of women are equity partners at Australia’s leading firms.

“It is only by women collectively recognising that they have the power and being committed to exercising that power that the process of untapping their reservoir of talent will generate genuine momentum,” she said, urging female lawyers to become active mentors and to recommend female lawyers to clients and fellow practitioners as part of a suite of actions that all women lawyers can perform to boost their stocks.

Kate Ashmor (pictured top, on the right, next to Fiona McLeod SC), the immediate past-president of Australian Women Lawyers, was the “mistress of ceremonies”.

Taking up the call to arms from Challans, Ashmor said women needed to be more active in publicising their outstanding work.

“If you wait for something to come along you will be waiting for an awful long time.”

Give us the coarse and crude clients
Fiona McLeod SC, the head of the Victorian Bar, was one of the nine Awards judges.

In introducing Sharon Cook, managing partner of Henry Davis York, as the winner of the Lasting Legacy Award, McLeod, who is also the chair of the Law Council of Australia (LCA) Equalising Opportunity in the Law Committee, challenged notions that male legal leaders are doing female colleagues a favour by shielding women from difficult male clients.

“What is the unconscious bias that is having us choose men as naturally fitted to the better brief, the promotion, the hot file with the hot client that will take them somewhere,” said McLeod, who asked the question of “when we come to this bullshit argument about merit, what does it mean?

“What it means is that you have had the hot brief, the hot file and the hot client over and over, so it is inevitable that you will be given the promotion.

“So when you in this room make your decision about who to put forward for the brief, for the file, for the opportunity day by day, think about that unconscious bias.”

McLeod made the point that such bias might not be malevolent, but it will still stifle career progression for females regardless.

“You might be thinking you are protecting the woman because she would be better off at home with her kids, she would be better off not hearing the coarse language that this [type of] client goes on with and he likes to drink. “But think about how that accumulates over the years ... so that when we say who are the women we are going to promote, where is the talent pool?

“Your decisions in this room, moment by moment, make that difference.”

McLeod currently has oversight of the LCA National Attrition and Re-engagement Study.

In accepting the Lasting Legacy Award, Cook said that diversity needs the active support of male champions in addition to women.

Justice Betty King QC (pictured right), a judge of the Supreme Court of Victoria, also made the point that there is still a long way to go for diversity in the profession when she introduced Chrissa Loukas SC as the Senior Barrister Award winner.

King was the 24th woman appointed to the Victorian Bar in 1975.

Between 1924, when the first woman was appointed to the Victorian Bar, and 1975, 1017 men were additionally admitted.

The Top 10
Only nine winners could be chosen from among the 47 finalists in the nine competitive categories, with Sharon Cook taking out the evening’s uncontested Lasting Legacy Award.

A full list of the winners are provided below.

Turn back the bias