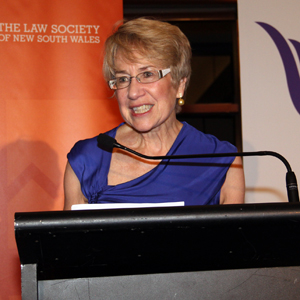 This year’s NSW Women Lawyers Achievement Awards drew hundreds of female lawyers, from up-and-comers to some of the most respected members of the judiciary.

Last Friday (25 October), junior and senior women of the NSW legal profession were honoured at a gala presentation dinner in Sydney’s Darling Harbour.

Justice Melissa Perry, a recent appointee to the Federal Court of Australia and the winner of the evening’s Woman Lawyer Advocate of the Year award, also attended.

Prior to the announcement of the winners, Professor Gillian Triggs delivered a keynote that focused on her time as president of the Australian Human Rights Commission, a role she accepted in 2012. She described the past 15 months as “a rollercoaster ride”, pointing to media backlash regarding her views on asylum seekers and freedom of speech.

“I now have become rather more used to the cut and thrust of what has proved to be a rewarding, if very challenging, role,” she said.

The evening’s blue ribbon award, the Life Achievement Award, went to Justice Beazley. She dedicated the award to her mother, who died last year, and her children, some of whom attended the gala dinner.

In her acceptance speech, Beazley spoke about the influence of women in the law and the women who have influenced her career, and concluded with a toast to all female lawyers in attendance.

She also paid tribute to Justice Mathews, the patron of WLANSW.

“I think why she has been such a beacon is because she’s not only done those hard yards, but she did every one of those hard yards with an extraordinarily high degree of professionalism, and she has lived her life sharing her knowledge and her wisdom,” said Beazley.

Other women honoured on the night were: