Home/
News/
Less firms and more time out of the office

Less firms and more time out of the office 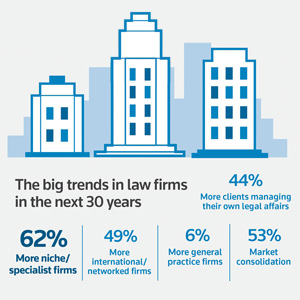 A legal survey has shown that the days of lawyers working in the office at full-service firms are numbered.

Thomson Reuters released the results of a survey on the Future of Law this week. The survey, which featured responses from over 100 senior practitioners at firms with between 20 to 250 lawyers, showed that specialisation was cited as the key plan to ensure long-term competitiveness.

Over 50 per cent of respondents said their firm would become more specialised or become highly-specialised in the next 30 years to stay competitive.

Not surprisingly, given that response, just over half of the respondents also predicted fewer firms and market consolidation in the future.

The survey also found that flexible work options will become the new normal.

Half of all respondents predicted that half to three quarters of their staff would operate permanently out of the office by 2044.

The survey also found that 44 per cent of respondents believe their law firm library would disappear by 2044 and that more consumers would manage their own legal affairs.

Less firms and more time out of the office