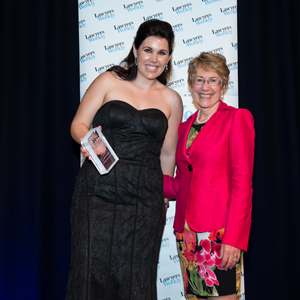 Marisa Muchow has picked up her second major award in as many years after winning The Public Service Award at the Lawyers Weekly Law Awards, proudly sponsored by Michael Page Legal.

Marisa Muchow has picked up her second major award in as many years after winning The Public Service Award at the Lawyers Weekly Law Awards, proudly sponsored by Michael Page Legal.

Marisa (pictured on the left receiving her award from Justice Margaret Beazley, president of the NSW Court of Appeal), is a director with the Australian Building Codes Board (ABCB) in Canberra.

She received the nod from the judges in a category that included fellow finalists Mary Macken, the corporate counsel of the NSW State Transit Authority, and Warren Scott, the general counsel of the Australian Prudential Regulation Authority.

“I thank Mary and Warren … whom I am sure are just as deserving,” said Marisa when accepting the award, which recognises the work of government lawyers.

Marisa has had an immediate impact since joining the ABCB in August 2012.

“As Marisa’s supervisor since her appointment as director in August 2012, I consider that she admirably exceeds the expectations of the ABCB Executive,” said Mike Balch, the group manager, certification, at the ABCB in nominating Marissa just prior to his retirement on 1 August. “I regularly receive comments from the ABCB Executive and Board praising Marisa’s efficiency in providing timely legal advice and practical solutions to policy and legal issues.”

The ABCB addresses issues of safety and health, amenity and sustainability in the design, construction and performance of buildings.

“Thanks to the team I work with, without their expertise I couldn’t work on the matters I do,” said Marisa, who also paid tribute to Mike Balch and her partner David, who accompanied her to the Awards.

Prior to joining the ABCB, Marisa was a senior legal counsel with the Department of Industry.

The Public Service Award was Marisa’s second major Award within the first eight years of her PQE career.

In 2012, Marisa picked up the Australian Corporate Lawyers Association Young Lawyer Achiever of the Year.