Passion for human rights pays off 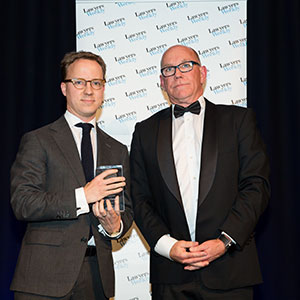 Burgess (pictured left with Steve Lancken, founder of Negocio Resolutions) thanked his firm and his colleagues when he accepted the award at this year’s Lawyers Weekly Law Awards, proudly sponsored by Michael Page Legal.

“I would like to thank King & Wood Mallesons for their generosity in providing the resources and sometimes the courage to make this kind of work possible, and to all the other firms here that do these same sorts of things,” he said.

“I would like to thank all the people that have worked with me on these matters and given up their nights and weekends to make sure we can deliver the same kind of service for these clients as we do our commercial clients.”

He said there is shortage of legal representation in this area, with dire consequences for clients.

“It is a complex area that requires significant legal resources, and where cross-institutional collaboration can have significant benefits,” Burgess said.

As a senior associate at the firm specialising in commercial litigation, regulatory inquiries and public law disputes, Burgess wanted to use his experience as a litigator to provide pro bono services.

He has clocked up 350 pro bono hours this financial year, and over 2700 pro bono and community hours over the past five years.

One of Burgess’ crowning achievements that saw him beat his contenders for the award was establishing and leading a Public Interest Litigation Clinic (PILC) partnership between KWM and Sydney University Law School.

The clinic runs as an elective course for senior law students through the university’s Social Justice Programme.

“This initiative has been a spectacular success, with Tamil clients of Liam becoming the first asylum seekers to successfully overturn security assessments through the independent review process,” the judges said.

Following the establishment of the PILC, Burgess led the KWM team through the first major case identified by students in the PILC program: a Tamil family held in detention for four years with no end in sight due to a security assessment by the Australian Security Intelligence Organisation.

Burgess led the team that represented the clients in the High Court and through the independent security assessment review process, which was set up part-way through the court proceedings.

The family was set free four days before they were due for the hearing before the full bench of the High Court.

Burgess also helped set up, and was a member of, the Security Assessments Working Group, coordinated by PILCH/Justice Connect.

The group managed to organise legal representation for all asylum seekers in NSW who got negative security assessments.

Burgess worked with two other security assessment clients referred to KWM through the group.

While one case continues, the other client was released from detention late last year after his security assessment was overturned.

The other finalists in the category were: Michael do Rozario from Corrs Chambers Westgarth, Scott McDonald from DLA Piper, Mia Matic from Norton Rose Fulbright, Geetha Nair from Australian Government Solicitor and Albert Yuen from Gilbert + Tobin.

Passion for human rights pays off