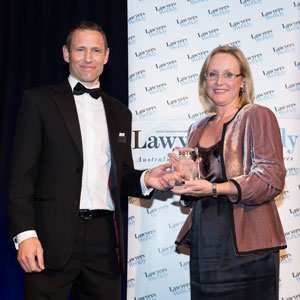 Jackie told Lawyers Weekly she was delighted and surprised to hear that she had won the Award, and was sorry she could not attend the ceremony held in Sydney earlier this month (8 August).

“I’ve received so many congratulatory emails and calls from all over the world from some people who I haven’t heard from for quite a long time. It’s a reminder of the profile and scale of the Awards,” she said.

“On [Jackie’s] behalf, as the head of our Sydney office, I am incredibly proud to accept this award,” said Felicity.

“I’m sure if [Jackie] were here she would tell you how incredibly humbled she is, in a field of very worthy recipients, to take this award. We’re incredibly proud of her at Norton Rose Fulbright. Congratulations Jackie.”

The other finalists in this competitive category were: Simonetta Astolfi from Maddocks, Natalie Bannister from Hall & Wilcox, Susan Hilliard and Mark McNamara from King & Wood Mallesons and Karen Payne from Minter Ellison.

Jackie O’Brien is an IP litigation specialist with more than 25 years’ experience in trade mark, patent and copyright law. She is part of NRF’s global IP team, representing a number of pharmaceutical and healthcare companies.

“I arrived at [Norton Rose Fulbright] three years ago and when I look back … one of the really pleasing things is seeing the team that my colleagues and I have built ... flourishing. It’s a great team; it’s doing great work … in the context of what is now a global footprint.”

In the past 12 months Jackie has led some of the largest patent litigations and class actions in the pharmaceutical sector currently being contested in Australia. One client described Jackie as “the consummate professional”.

In addition to her litigation work, Jackie is the national pro bono partner and the head of the national corporate social responsibility committee, which oversees Fulbright’s work in pro bono, charitable giving, volunteering, sustainability and reconciliation.

“It’s very much a team effort and it generates really good contributions to different organisations. It’s something we are very proud of.

Jackie also plays a role in the mentoring and training of young lawyers and staff.

Dr Rosemary Howell, former secretary general of the Law Council of Australia and a visiting professorial fellow at the University of NSW, was the category judge.

She described Jackie as “a successful woman with strong business acumen and a leader in corporate social responsibility in her firm and in the broader community.”

“Jackie demonstrates excellence in her specific area of practice and is considered to be a key figure within the firm. She has an ongoing commitment to IP law and development as well as a role as a volunteer mentor in various organisations.”